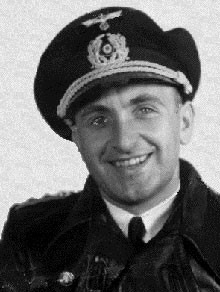 Hans-Dieter Heinicke who patrolled New England for 13 days in U-576 in April and May, 1942. Photo courtesy of http://uboat.net/men/commanders/445.html.
KapitänleutnantHans-Dieter Heinicke brought his submarine U-576 on a lengthy and continuous 13-day patrol of New England waters between 20 April and 2 May 1942. The incursion began several hundred miles south of Cape Race, Nova Scotia with the boat heading west. Then at a position south-southwest of Nantucket U-576 began a slow progression northwards for over a week, ending off the tip of Cape Cod at Provincetown, and passing just east of Nantucket Shoals. Then the boat again picked up speed and headed east towards Cape Sable, which it passed heading eastwards towards Halifax on the 2nd of May 1942.
Whilst in New England waters U-576 sank two Allied vessels – the American Pipestone County on the 21stof April and the Norwegian Taborfjell on the 30th of April east of Provincetown. The Pipestone County of 5,102 tons and commanded by Captain Richard E. Hocken was sunk by two torpedoes well southeast of Nantucket. All 46 Allied sailors managed to survive the attack and were given provisions by the Germans.
The men were divided from a raft and four boats into three groups, one of which was rescued by the Norwegian ship Tropic Star and landed in Boston on the 25th of April. The other group on the third lifeboat was rescued by the US Coast Guard Cutter Calypso (WPC 104) and landed in Norfolk, Virginia. A third group was picked up by the fishing vessel Irene and May  and landed in Cape May, New Jersey (UBoat.net).
The men on the Taborfjell were not so fortunate in that 17 out of the officers and men on the small, 1,339-ton ship perished and only three survived. They were struck less than 100 miles east of Cape Cod and sank within a minute. The three survivors made it to a raft, and witnessed three others in the water. The U-Boat ignored them. Twenty hours later HMS P-552 rescued three of the men and took them to St. John’s Newfoundland (UBoat.net).
Hans-Dieter Heinicke was born in May 1913 and was in the Crew of 1933. Early in his naval career he served as 1sts Watch Officer of the U-Boat tender Weichsel and then on U-73 in 1940 and 1941. He served as the commanding officer of U-576 from June 1942 until July 1942 when he and the boat we destroyed by the Allies (two Kingfisher aircraft and the M/V Unicoi’s gunfire) off Cape Hatteras on the 15th. His career tally was six ships sunk or damaged for some 35,000 tons. He received no decorations and perished at age 29 along with 44 crewmates.
SOURCES:
Busch, Rainer and Röll, Hans-Joachim, “German U-Boat Commanders of World War II, A Biographical Dictionary,” Greenhill Books, London and Naval Institute Press, Annapolis, MD, 1999
Helgasson, Guðmundur and Kolbicz, Rainer, www.uboat.net, 2015
Högel, Georg, “U-Boat Emblems of World War II 1939 – 1945,” Schiffer Military History, Atglen, PA, US, 1999
Kurowski, Franz, Knights of the Wehrmacht, Knight’s Cross Holders of the U-Boat Service,” Schiffer Military/Aviation History, Atglen, PA, US, 1995
Mason, Jerry, www.uboatarchive.net – for the KTB or war diary of this patrol, 2015
Niestlé,Axel, “German U-Boat Losses During World War II – Details of Destruction,” Naval Institute Press, Annapolis, MD, 1998