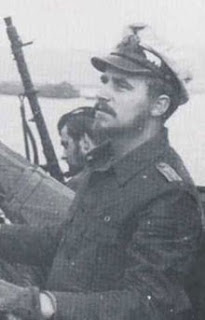 KapitänleutnantDietrich Borchert, commander of U-566 which spent 23 days intensely patrolling New England waters in May of 1942. Photo courtesy of http://uboat.net/men/commanders/108.html
Kapitänleutnant(later Korvettenkapitän) Dietrich Borchert brought his command U-566 deep into New England waters including off Long Island, Block Island, Nantucket, Cape Cod and into the Gulf of Main and Massachusetts Bay between the 1st and 23rd of May, 1942.
The incursion into New England waters began inauspiciously well south of Cape Sable, Nova Scotia on the 1st of May, heading westward for five days to a point well south of Block Island, Rhode Island. Then the true attack began on the 5thof May with a course change to the northwest towards Montauk, New York, which U-566 reached on the 8th of May.
Then the U-Boat turned southeast to a point well south of Block Island, turned north on the 10th, and made it to within about 200 miles of Block Island on the 12th. Then southeast again to a point south of the Cape Cod Canal on the 13th, and northeast to a point about 150 miles from the Nantucket Lightship on the 15th.
From off Nantucket Borchert headed northwest past Provincetown Massachusetts on the tip of Cape Cod to enter Massachusetts Bay on the 16th of May. He then headed east for four days into the Gulf of Maine, which he reached the center of on the 19th. At that point U-566 reversed course and headed southwest to a point of Chatham Massachusetts, between the southern tip of Cape Cod and Nantucket, quite close to the infamous and dangerous currents and sand bars of the Nantucket Shoals.
From a point just northeast of Nantucket on the 21st of May Borchert began he exit voyage, heading south southeast until he cleared out of the region on the 23rdof May 1942 well southeast of Nantucket. His was the most extensive enemy patrol of New England waters thus far in World War II. The only ship which they sank on this patrol, which began in Brest France on the 8th of April and ended there on the 30th of June was the 8,967-ton British freighter Westmoreland, sunk on June 1st off Bermuda.
On this patrol U-566 was provided with extra provisions by U-459 at a point roughly 500 nautical miles northeast of Bermuda. She and seven other U-Boats composed the Padfinder group on 21 May roughly 400 nautical miles east of New York (Wynn, Vol. 2, p.42). After trying to determine how far east ships were operating between New York and South and Central America the boats dispersed on about the 25th of May and U-566 moved southwards. Again on its return voyage U-566 received fuel from U-459, this time west of the Azores Islands.
Dietrich Borchert was born in 1909 and survived the war, living until 1990 and age 81. He was 33 at the time of this patrol and a member of the Crew of 1933/34. He began his naval career in sea aircraft weapons school and joined U-Boats in November 1939. After serving as commander on U-24 to March 1941 he commissioned U-566 in March 1941. After five patrols of 196 days he sank only two ships (the Meropi on 15 Feb. 1942 being the other aside from the Westmoreland) and received the Iron Cross 1st Class in July 1942.
In July 1942 he moved ashore with the 1st Flotilla, then the 24th U-Boat Flotilla, then to Danzig and Kiel where he ended the war in detention, being freed in November, 1945. He was promoted to Korvettenkapitän in April, 1945. U-566 was scuttled off northwest Portugal on 24 October 1943 after being damaged by six depth charges from a British Wellington bomber (Squadron 179/A). All 49 sailors survived (UBoat.net).
SOURCES:
Busch, Rainer and Röll, Hans-Joachim, “German U-Boat Commanders of World War II, A Biographical Dictionary,” Greenhill Books, London and Naval Institute Press, Annapolis, MD, 1999
Helgasson, Guðmundur and Kolbicz, Rainer, www.uboat.net, 2015
Högel, Georg, “U-Boat Emblems of World War II 1939 – 1945,” Schiffer Military History, Atglen, PA, US, 1999
Kurowski, Franz, Knights of the Wehrmacht, Knight’s Cross Holders of the U-Boat Service,” Schiffer Military/Aviation History, Atglen, PA, US, 1995
Mason, Jerry, www.uboatarchive.net – for the KTB or war diary of this patrol, 2015
Niestlé,Axel, “German U-Boat Losses During World War II – Details of Destruction,” Naval Institute Press, Annapolis, MD, 1998