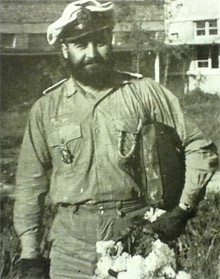 Hans-Werner Offermann who
brought U-518 into New England waters for four days in September 1944. Photo
courtesy of http://uboat.net/boats/patrols/patrol_1164.html
Oberleutnant zur See Hans-Werner Offermann brought
his command U-518 on a four-day incursion into New England waters from the 16th
to the 19th of September. The boat was on its way to Norway, and was
to provide weather reporting duties during its return voyage (Wynn, Vol. 2, p.10).
The incursion began well south (300 miles) of Montauk New York on the 16th
and headed east in a northeast trajectory until the 19th, when the boat
left New England waters about 200 miles south of Cape Sable, Nova Scotia,
heading east.

On 9th August convoy escorts attacked a
submarine in mid-Atlantic which was mostly likely U-518 (Uboat.net). Early in
September while off Cape Hatteras the boat had to withstand several intensive
searches for it by Allied military vessels and aircraft (Wynn). The patrol
began in Lorient on the 15th of July and ended in Kristiansand,
Norway on the 24th of October 1944, evidently because Allies had over
run the French Atlantic coast bases.

During this patrol U-518 damaged the US merchant
ship George Ade, which later sank in a hurricane on the 13th of
September. U-518 rode out the same hurricane which sank the USS Warrington, a destroyer,
northeast of the Bahamas and several other Allied vessels on the US east coast.
Even when attacking the George Ade the ship’s naval gunners put up a
counter-attack, as did the minesweeper USS Project, which drove U-518 away.

Overall Offermann achieved 250 patrol days over
three patrols and damaged one ship – the George Ade – and sank another. He
received the German Cross in Gold as well as the Iron Cross 1st and
2nd Class. He perished at age 23 on 22 April 1945, just before war’s
end, when the US Navy destroyer escorts USS Carter and USS Neal A. Scott sank
U-518 in mid-Atlantic with all hands (Uboat.net, Niestle).