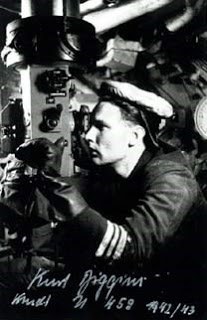 Kurt Diggins who brought U-458 to New England for a four-day transit between 26 and 29 July, 1942., Photo courtesy of http://uboat.net/men/commanders/205.html
Kapitänleutnant Kurt Diggins brought his command U-458 into the waters off New England between the 26thand 29th of July, 1942. The incursion began some 300 miles southeast of Nantucket and progressed in a straight line northeast for four days until the sub exited the area south of Cape Sable Nova Scotia on the 29th.
During this patrol on the 28thU-458 is said by Wynn (Vol. 1, p.305) to have encountered Convoy ON 113 “SW of Sable Island.” Convoy ON 113 left the UK on 17 July and arrived in Halifax on the 31st of July having lost five ships to U-boats. ON stands for Outbound from the UK to North America.
According to Wynn U-754 “came up” to join U-458 in an attack on the convoy but were unsuccessful and U-754 was sunk on the 31st off Halifax on the same day the convoy arrived there from the UK. Once clear of New England waters U-458 was also attacked, on 2 August, by Hudsons from RCAF Squadron 113 and damaged (Wynn, Ibid.).
The only issue I take with this account is that Cape Sable is not on a direct route between the UK and Halifax, but rather several hundred miles to the southwest of the projected course, so it might have been another convoy. U-458 was more effective in penetrating Convoy ON 115 (they are all odd-numbered), as it found and sank the tanker Arletta of 4,870 tons on the 5th of August south-southwest of Cape Race.
This patrol began in Kiel on the 21st of June and was the maiden patrol of U-458. It ended in St. Nazaire on the 27th of August 1942. On the way across the Atlantic Diggins found and sank the 2,714-ton Mosfruit on the 30th of June. Then U-458 received fuel from U-460 presumably near the Azores. Wynn (Vol. 1, p.305) is clear on what happened to U-458 when it patrolled the formerly lucrative waters of Cape Hatteras, once known as Torpedo Junction (see Homer Hickam for a book by that name and subject matter):
U-458 “was one of the last seven boats to operate off the US east coast. By this time an efficient convoy system was in place and anti-submarine defenses were formidable. U-458 patrolled south of Hatteras until 19.7.42, when U-boats were withdrawn because of lack of success and the loss of U-215 and U-576.”
Kurt Diggins was born in October 1912 and survived the war, living until March 2007 and the age of 94. A member of the Crew of 1934 he initially trained aboard the Gorch Fock and the light cruiser Karslruhe. Interestingly he was an officer aboard the Admiral Graf Spree which was scuttled off Montevideo Uruguay on the 17th of December 1939 and made his way back to Europe in part as a stowaway on a ferry to Argentina (Uboat.net).
Up to April 1940 Diggins led minesweeping flotillas (5th and 6th) and joint U-boats in April 1940. He commissioned U-458 in December 1941 the week Hitler declared war on the United States. The boat was sunk in the Mediterranean off Italy in August 1943. Eight perished and 39 lived, including Diggens, who until late 1947 was held captive in the UK at Camp 18 Featherstone Park Camp, Haltwhistle.
Diggins joined the new German navy a decade later and retired from it (UBoat.net). He went on to become President of the VDU (Verband Deutscher U-Bootfahrer – German Submarine Veterans Association). Over the course of his career Diggins sank two Allied ships, both on this patrol, for 7,584 tons. He received the Iron Cross 1st Class and an Italian Bronze Medal for Military Valor.
SOURCES:
Busch, Rainer and Röll, Hans-Joachim, “German U-Boat Commanders of World War II, A Biographical Dictionary,” Greenhill Books, London and Naval Institute Press, Annapolis, MD, 1999
Helgasson, Guðmundur and Kolbicz, Rainer, www.uboat.net, 2015
Högel, Georg, “U-Boat Emblems of World War II 1939 – 1945,” Schiffer Military History, Atglen, PA, US, 1999
Kurowski, Franz, Knights of the Wehrmacht, Knight’s Cross Holders of the U-Boat Service,” Schiffer Military/Aviation History, Atglen, PA, US, 1995
Mason, Jerry, www.uboatarchive.net – for the KTB or war diary of this patrol, 2015
Niestlé,Axel, “German U-Boat Losses During World War II – Details of Destruction,” Naval Institute Press, Annapolis, MD, 1998