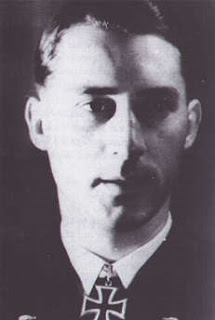 Heinz-Otto Schultze who took U-432 on a 24-day patrol of New England in May and June 1942 and sank two ships there. Photo courtesy of http://uboat.net/men/schultze_heinz-otto.htm
KapitänleutnantHeinz-Otto Schultze brought his command U-432 into New England waters for the longest patrol in the area up to that date: 24 days. It began south of Cape Sable on the 20th of May and ended several hundred miles south of the same landmark on the 16tdh of June. During that time Schultze sank the Liverpool Packet and the Zurichmoor, both near Cape Sable.
Three days before entering the region U-432 sank the small ship Foam of 324 tons (US flag), off Halifax. The vessel was a steam trawler which has previously been owned by McAllister Towing of New York. Then three days into the area Schultze found and sank the Zurichmoor, a 4,455-ton British ship about 150 miles south of the entrance to the Gulf of Maine. The two torpedoes so devastated the ship that it plummeted to the bottom in a minute and a half. Captain James Henry Anderson as well as six gunners and a merchant crew of 38 were all killed. The ship had been bound from Halifax, which it left on 21 May to St. Thomas, US Virgin Islands, in ballast (Uboat.net).
Just over a week later, on the 31st of May and much closer to Cape Sable, Schultze found and sank the Canadian 1,188-ton steamer Liverpool Packet. Though two crew were killed, the balance of 19 men managed to row and sail to Seal Island, Nova Scotia, roughly 15 miles away and near Cape Sable. The vessel had been bound from New York to Halifax with 1,945 tons of government cargo (Uboat.net).
Three days later, on 3 June, U-432 found and destroyed two fishing vessels, the Ben & Josephine and the Aeolus. Both were in the Gulf of Maine west of Cape Sable. Schultze allowed all eight men in the Ben & Josephine (Captain Guiseppe Ciaramitaro) to abandon ship, and they met up with the survivors of the Aeolus after their vessel was shelled and sunk. The Aeolus was skippered by Captain John O. Johnson of Gloucester Massachusetts. Again all six men were allowed to disembark in their dories and the 41-ton boat was sunk in 20 minutes by 17 shell shots. Together with survivors of the Ben & Josephine the 14 men made their own way to Mount Desert, Maine, where they were rescued a day and a half after the attack.
Roughly a week later (on 9 June) and in a similar position U-432 came upon Convoy BX  23A to the east of the center of the mouth of the Gulf of Maine. The vessels attacked were the Kronprinsen and the Malayan Prince, a German-built, British-flagged 8,593-ton motor ship. The Malayan Prince was hit by one of four torpedoes fired by Schultze, however it was only slightly damaged and was put back in service the following month.
The Kronprinsen was hit after a minute and a half by U-432’s torpedo, however the 7,073-ton Norwegian motor ship was towed to shore despite losing her stern and having her deck cargo catch afire. Ultimately the vessel was towed from Pubnico Fairway to Halifax on 23 July and to Boston on 9 October for further repairs. The ship was abandoned in the Yellow Sea, confiscated by the Chinese government, and since 1969 here whereabouts have been unknown.
After sinking five ships of 6,110 tons and damaging two others for 15,666 tons, all but one of them (Foam) in New England waters, Schultze headed back to France, which he reached at La Pallice on 2 July. The patrol began 64 days earlier on 30 April 1942. U-432 was involved with the Padfinder group 400 miles southeast of New York between the 21st of May and the 27th, and can be said to have proved the instincts behind the group correct inasmuch as the submarine sank or damaged several targets during its participation in Padfinder.
On the way to New England, on the 2nd of May U-432 was attacked from the air near La Corunna, Spain and escaped six bombs with minor damage (Uboat.net). On the way back to France U-432 was refueled by U-459 west of the Azores in end June.
Heinz-Otto Schultze was born in September 1915 and perished at age 28 in November 1943 when U-849 was found and sunk by a US Liberator bomber on 25 November 1943 in the South Atlantic near the estuary of the Congo River off West Africa. The depth charges doomed the boat with all hands. Schultze’s father Otto commanded SM U-63 in World War I and accounted for 52 ships of nearly 130,000 tons (UBoat.net).
The younger Schultze joined the German Navy in the Crew of 1934 and U-boats in May of 1937. He was 2nd Watch Officer of U-31 to 1938 and participated in Gunnery School in Kiel. He then commanded U-4 in 1940 and U-141 before commissioning U-432 in April 1941. After U-432 he took command of U-849 in which he perished.
Considered by Uboat.net to be a Top Ace, Schultze sank 20 ships and damaged 2 others for a total of over 83,000 tons. He was awarded the Knights Cross on 9 July 1942, the 116th recipient in the German Navy (Kriegsmarine) and the 56th U-Boat officer so decorated. U-432 was sunk northeast of Newfoundland and south of Iceland on 11 March 1943 by the Free French corvette Aconit – 20 out of 46 mariners survived.
SOURCES:
Busch, Rainer and Röll, Hans-Joachim, “German U-Boat Commanders of World War II, A Biographical Dictionary,” Greenhill Books, London and Naval Institute Press, Annapolis, MD, 1999
Helgasson, Guðmundur and Kolbicz, Rainer, www.uboat.net, 2015
Högel, Georg, “U-Boat Emblems of World War II 1939 – 1945,” Schiffer Military History, Atglen, PA, US, 1999
Kurowski, Franz, Knights of the Wehrmacht, Knight’s Cross Holders of the U-Boat Service,” Schiffer Military/Aviation History, Atglen, PA, US, 1995
Mason, Jerry, www.uboatarchive.net – for the KTB or war diary of this patrol, 2015
Niestlé,Axel, “German U-Boat Losses During World War II – Details of Destruction,” Naval
Institute Press, Annapolis, MD, 1998