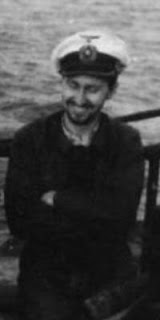 Hans-Heinz Linder, who brought U-202 on a 6-day incursion into New England waters in June of 1942. Photo courtesy of: http://uboat.net/men/commanders/737.html
Kapitänleutnant (later Korvettenkapitän) Hans-Heinz Linder brought his command U-202 on a fairly complex patrol of six days in New England waters between the 11thand 16th of June 1942. The U-boat entered the region about 250 nautical miles south of Cape Sable Nova Scotia, then motored west for a day, then south of Nantucket Linder turned northwest and motored to a point southwest of Block Island.
On the 13th of June U-202 deposited a team of saboteurs at Amagansett, Long Island. This was part of the highly secretive Operation Pastorius. U-202 found itself aground and motored furiously to free itself – the sounds were heard and diesel smelled ashore. The high tide ultimately freed the sub. The men were intercepted by a lone Coast Guardsmen who they tried to bribe without success. He told his superiors and they unearthed a weapons cache in the sand.
Nevertheless the Germans managed to arrive in New York and disperse to Chicago and beyond. Eventually one of them – John Dasch – turned himself and the others in. (When he phoned the FBI they didn’t believe him, so he went to Washington DC in person and was interrogated for five days (Wynn, Vol. 1, p.148)).
Most of them were executed (6 men, on 8 August in Washington DC, by electric chair), but Dasch was spared and eventually (1948) returned to Germany (Uboat.net). There was another group of saboteurs landed in Ponta Vedra, Florida, and as we have seen a single spy in New Brunswick and a pair of spies in Maine.
From there he back-tracked to a point well south (by about 300 miles) of Nantucket, and turned west to exit the area towards the Delaware Capes. Off New Jersey on the 22ndof June Linder sank the Argentinian ship Rio Tercero. The boat was counter-attacked by aircraft and a Navy blimp, both of which dropped bombs on the U-boat. On the 1st of July U-202 dispatched the City of Birmingham between Hatteras and Bermuda. In early July U-460 refueled U-202 (Wynn, Vol. 1, p.148), west of the Azores. Then on the 17th the submarine tried to penetrate the screen around Convoy OS 34 but could not do so due to corvettes. The patrol began in Brest France on the 27th of May and ended there on the 25thof July, 60 days later.
Hans-Heinz Linder was born in February 1913 and a member of the Crew of 1933. His career to November 1939 when he joined U-boats is little known. He was then commander of U-18, served as supernumerary aboard U-96 (Busch and Röll, p.148) and in March 1941 commissioned U-202. In September 1942 he moved ashore with the 1st Flotilla then a training leader with the 25th U-Boat Flotilla. He was caught in an air raid by the Soviets in Libau, Latvia on 10 September 1944 and killed at age 31. His total claim of Allied tonnage was for 8 ships of nearly 34,000 tons. He received no decorations but was promoted posthumously with seniority.
SOURCES:
Busch, Rainer and Röll, Hans-Joachim, “German U-Boat Commanders of World War II, A Biographical Dictionary,” Greenhill Books, London and Naval Institute Press, Annapolis, MD, 1999
Helgasson, Guðmundur and Kolbicz, Rainer, www.uboat.net, 2015
Högel, Georg, “U-Boat Emblems of World War II 1939 – 1945,” Schiffer Military History, Atglen, PA, US, 1999
Kurowski, Franz, Knights of the Wehrmacht, Knight’s Cross Holders of the U-Boat Service,”
Schiffer Military/Aviation History, Atglen, PA, US, 1995
Mason, Jerry, www.uboatarchive.net – for the KTB or war diary of this patrol, 2015
Niestlé,Axel, “German U-Boat Losses During World War II – Details of Destruction,” Naval Institute Press, Annapolis, MD, 1998