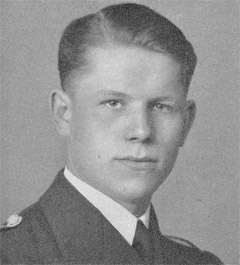 Friedrich-Wilhelm Marienfeld,
who brought U-1228 on a short transit through New England waters of 3 days en
route to surrendering in Portsmouth, New Hampshire on the 17th of
May 1945. Photo courtesy of http://uboat.net/men/commanders/786.html
Oberleutnant zur See Friedrich-Wilhelm Marienfeld brought his command
U-1228 through New England waters from the 15th to the 17th
of May 1945 in order to surrender at the US Naval Base in Portsmouth, New
Hampshire.

Wynn (Vol. 2, p.237) states
that U-1228 left Kristiansand Norway on the 14th of April and that
on the 11th of May she met with the US Navy destroyers USS Scott and
USS Sutton in a position 350 nautical miles east of Cape Race Newfoundland. UK
historian Derek Waller provides much more granular detail. According to Waller,
the signal to surrender was received by U-1228 on the 9th of May, at
which point the submarine was in the mid-Atlantic. Marienfeld initially motored
towards Newfoundland Canada, sending a signal to the Allies to that effect.

While en route to U-1228’s
position the US Navy destroyer escorts USS Sutton and USS Neal A. Scott
intercepted U-858, which was also surrendering, on the 10th of May.
They began to escort U-858 then peeled off to resume the search for U-1228.
They found their quarry on the 11th of May early in the afternoon.
It was too rough to effect a boarding party onto the U-boat, so each destroyer
escort took up position on either side of U-1228 and began motoring towards a
designated surrender point in Casco Bay Maine, near Portland.

The weather continued too
rough to board the sub on the morning of the 12th (Waller cites “dense
fog, icebergs and heavy seas,”) but later in the day USS Neal A. Scott sent a
boarding party. Shortly afterwards USS Sutton broke away in order to intercept
another U-boat, U-234. So the Neal A. Scott and U-1228 continued towards Casco
Bay. On the 15th of May another signal arrived aboard the Neal A.
Scott, ordering it to bypass Casco Bay and proceed directly to the Examination
Anchorage in Portsmouth, New Hampshire’s Lower Harbor. The Allied escort and
its former nemesis thus arrived at 6 AM on the 17th of May in
Portsmouth. 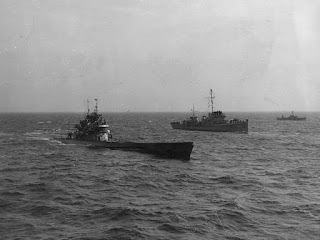 Friedrich-Wilhelm Marienfeld
was born in March 1920 and was thus 25 years of age when he surrendered. He
survived the war and lived until 1973 and the age of 53. A member of the Crew
of 1938, he began in 1940 with service aboard the destroyer Z-7 Hermann
Schoemann up to August 1940. He commanded the artillery lighter Adventura to
October and then joined U-boats. Marienfeld served as 2nd Watch Officer
of U-205 from May 1941 to April 1942.

Marienfeld commanded U-4
from June 1942 to January 1943 but went on no war patrols aboard her (Busch
& Roll). From December 1943 to the capitulation he commanded U-1228, during
which he sank a Canadian corvette, the HMCS Shawinigan (K 136) in the Cabot Strait,
Canada. All 91 officers and men aboard were killed (UBoat.net). Marienfeld
received no decorations. 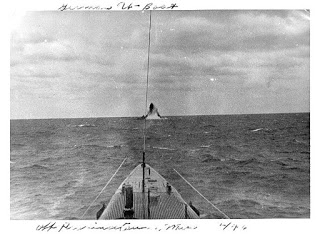 The United States government
officially took title to the submarine in August 1945 as a war prize. U-1228 was
sunk by the US Navy submarine USS Sirago (SS 485) on the 5th of
February 1946 37 nautical miles northeast of
Provincetown, Massachusetts (the tip of Cape Cod). The position is 42°32′N 69°37′W (Niestle).

Again UK historian Derek Waller provides
the kind of granular detail which only someone who has pored through deck logs
and correspondence on the topic can do. Like U-805, U-1228 was declared an “unallocated”
vessel and ordered by Allied agreement to be sunk by 15 February 1946. On the 4th
of February a submarine rescue vessel (ASR 12) named USS Penguin towed U-1228
out of the Portsmouth Navy Yard. That same day the US Navy submarine USS Sirago
(SS 485) departed the submarine base in New London, Connecticut, bound for
Provincetown, Massachusetts, on the tip of Cape Cod.

The USS Sirago arrived at Provincetown
Anchorage on the 4th and overnighted there. Early on the 5th
it headed into deeper water to the northeast in order to rendezvous with the
USS Penguin and its tow, U-1228. By 9:37 AM U-1228 was cast off from the
Penguin and ready to meet its fate. At 10:09 AM the Sirago fired its first
torpedo, which passed beneath the U-boat. A second projectile struck its quarry
by the stern, making U-1228 list to starboard. A third torpedo failed to strike
the target (again passing beneath it), however a fourth missile hit the German
boat amidships (see photo above), causing its immediate destruction. According
to Waller the location of U-1228’s ultimate resting place is 42°30′N 69°38′W (the author is indebted to Derek Waller
for these two paragraphs).