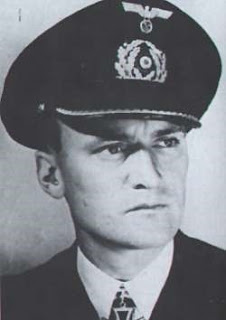 Harald Gelhaus, commander of U-107 which spent 6 days off New England in January and February 1942. Photo courtesy of http://uboat.net/men/gelhaus.htm
Oberleutnant zur See(soon to be Kapitänleutnant) Harald Gelhaus, aged 27, brought his submarine U-107 through the waters south of New England between the 30th of January and the 4th of February, 1942. It was a simple trajectory from east to west. During a dip south marginally closer to Bermuda than New England on the 31st of January Gelhaus dispatched the British tanker San Arcadio (covered in www.uboatsbermuda.blogspot.com).
On exiting the waters for Cape Hatteras, U-107 sank the US steamer Major Wheeler on the 6th of February and later, on the 21st, damaged the Norwegian motor vessel Egda before returning to Lorient on the 7th of March 1942. The submarine had set out from Lorient on the 7th of January.
Harald Gelhaus was born in Göttingen on 24 July 1915, and survived the war, living until the age of 82. Beginning in the Class of 1935 he then served on the light cruiser Karlsruhe and then the battleship Gneisenau before joining U-Boats in 1939. Gelhaus served on U-103 as 1st Watch Officer on three patrol before taking command of U-143 in March 1941.
It was aboard the already established U-Boat U-107 that Gelhaus earned his reputation and, by sinking or damaging 20 ships of over 110,000 tons, the Knights Cross decoration in March 1943. This was supplemented by the U-Boat Front Clasp in October 1944. After a number of training and staff roles in 1944 and 1945, Gelhaus was captured and held for three months by the Allies.
SOURCES:
Busch, Rainer and Röll, Hans-Joachim, “German U-Boat Commanders of World War II, A Biographical Dictionary,” Greenhill Books, London and Naval Institute Press, Annapolis, MD, 1999
Helgasson, Guðmundur and Kolbicz, Rainer, www.uboat.net, 2015
Högel, Georg, “U-Boat Emblems of World War II 1939 – 1945,” Schiffer Military History, Atglen, PA, US, 1999
Kurowski, Franz, Knights of the Wehrmacht, Knight’s Cross Holders of the U-Boat Service,”
Schiffer Military/Aviation History, Atglen, PA, US, 1995
Mason, Jerry, www.uboatarchive.net – for the KTB or war diary of this patrol, 2015
Niestlé,Axel, “German U-Boat Losses During World War II – Details of Destruction,” Naval Institute Press, Annapolis, MD