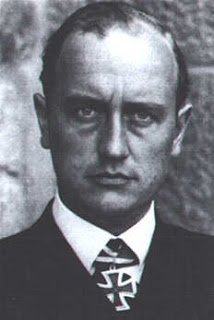 Werner Winter, who attacked New England waters for 11 days early in 1942. Photo courtesy of http://uboat.net/men/winter.htm
Kapitänleutnant(later Korvettenkapitän) Werner Winter took his command U-103 along the far southern boundaries off New England, along the Continental Shelf, starting on the 28th of January, 1942. For five days until the 2ndof February the boat made a straight westwards path till it exited south of Montauk. Then, four days later it returned on a general eastward track and between 6 and 10 February U-103 moved eastwards until it exited essentially where it had entered, well south of Cape Sable, Nova Scotia.
On 2nd of February, the day it cleared Montauk and out of New England waters Winter sank the W. L. Steed off Delaware and then the San Gil off Maryland on the 4th. The following day U-103 dispatched the US tanker India Arrow off New York then another tanker, the China Arrow, off Delaware Bay the same evening.
The patrol began as the second wave of Paukenschlag U-Boats to attack America, in support of the receding first wave. It consisted off U-103, U-106 (Rasch), and U-107. It ended on 1 March in St. Nazaire, having begun in Lorient on 3rd January.
Born on 26 March 1912 in Hamburg, Winter was 29 at the time of this patrol. A member of the Crew of 1930, he served on the Schlesien and light cruiser Emden first, then joined U-boats in 1935. He performed training and two fruitless patrols in U-22 in 1939. His three successful patrols in U-103 in 1941 and 1942 earned him the Knights Cross in June 1942.
Werner Winter was in command of the 1st front Flotilla in Brest France from July 1942 to its capitulation, after which he was held captive from 1945 to November 1947. He returned to the Bundesmarine until retiring in 1970. He died in Kiel on 9 September 1972 at age 60.
SOURCES:
Busch, Rainer and Röll, Hans-Joachim, “German U-Boat Commanders of World War II, A Biographical Dictionary,” Greenhill Books, London and Naval Institute Press, Annapolis, MD, 1999
Helgasson, Guðmundur and Kolbicz, Rainer, www.uboat.net, 2015
Högel, Georg, “U-Boat Emblems of World War II 1939 – 1945,” Schiffer Military History, Atglen, PA, US, 1999
Kurowski, Franz, Knights of the Wehrmacht, Knight’s Cross Holders of the U-Boat Service,” Schiffer Military/Aviation History, Atglen, PA, US, 1995
Mason, Jerry, www.uboatarchive.net – for the KTB or war diary of this patrol, 2015
Niestlé,Axel, “German U-Boat Losses During World War II – Details of Destruction,” Naval Institute Press, Annapolis, MD