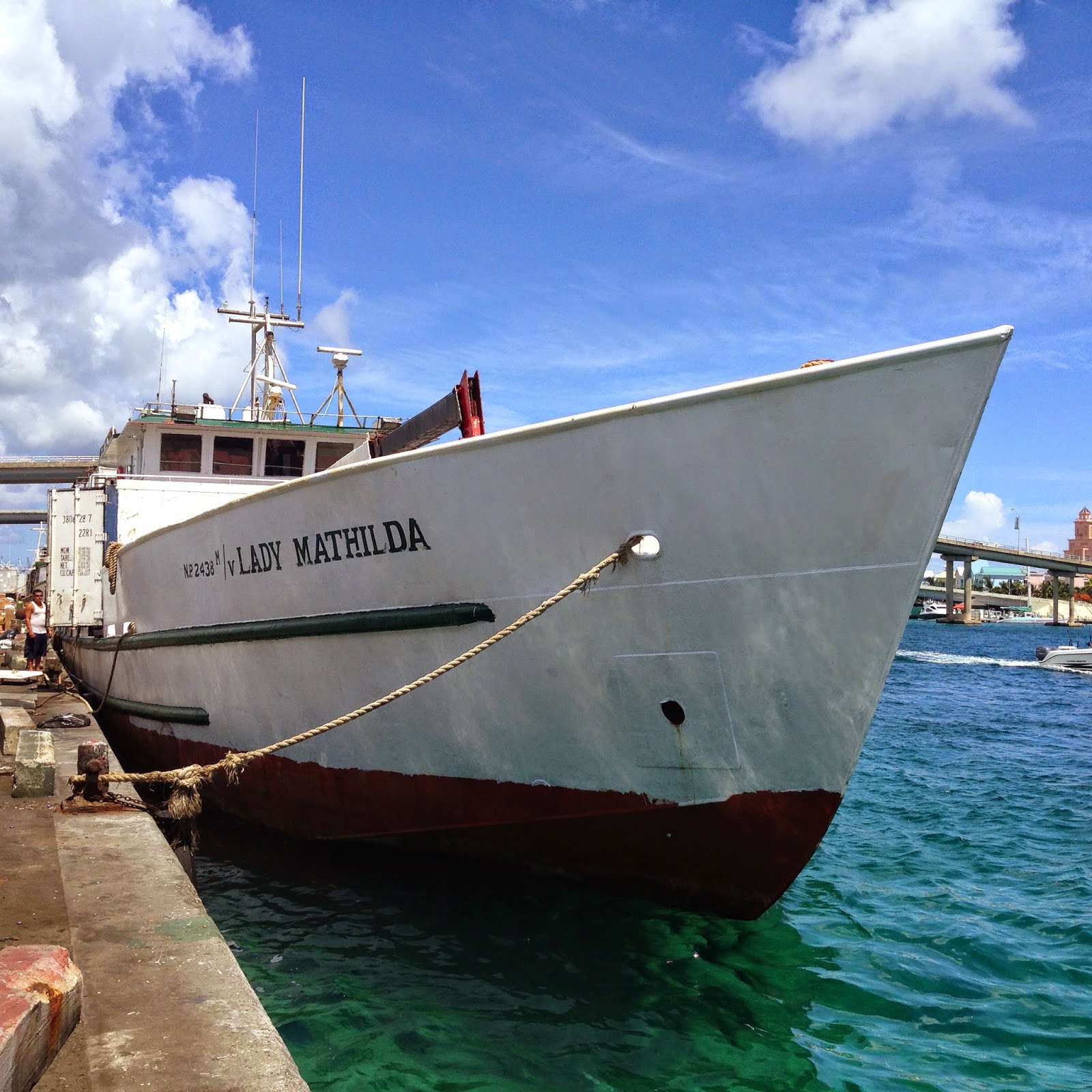 Photo of the M/V Lady Mathilda being loaded for her passage south on Friday March 27th, 2015. Note that the container situated on the foredeck behind the crane is open to receive cargo. Note also that the mooring lines are not equipped with rat-deterent guards. Another vessel, the M/V Grand Master, was being fumigated against rodents and insects at the same time, also at Potter’s Cay. Note also the double radar units and various radio and GPS antennae above the wheel house. The ship travels further distances than about any other mailboat in the Bahamas and must remain in contact and have reliable weather information available to it around the clock.
Finally, it would appear that the starboard anchor at least is not ready to be deployed – the socket is empty, so it must be under repair. From other photos (below) taken at the same time, it appears neither anchor is hanging in the customary place, meaning the anchor must be hosted over the rail – a cumbersome task. Perhaps a reader can enlighten the author on why no anchors appear on the ship’s bow? 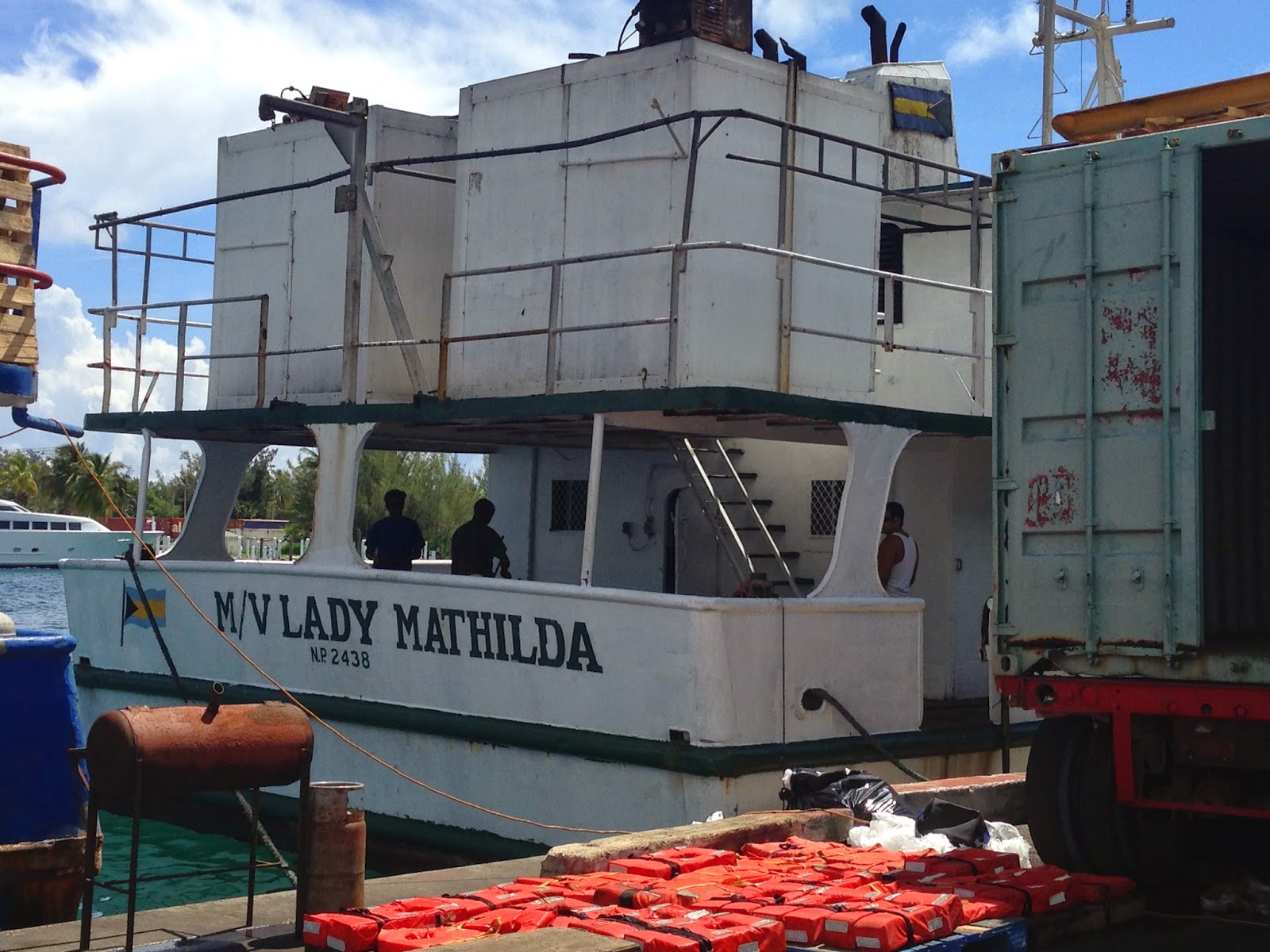 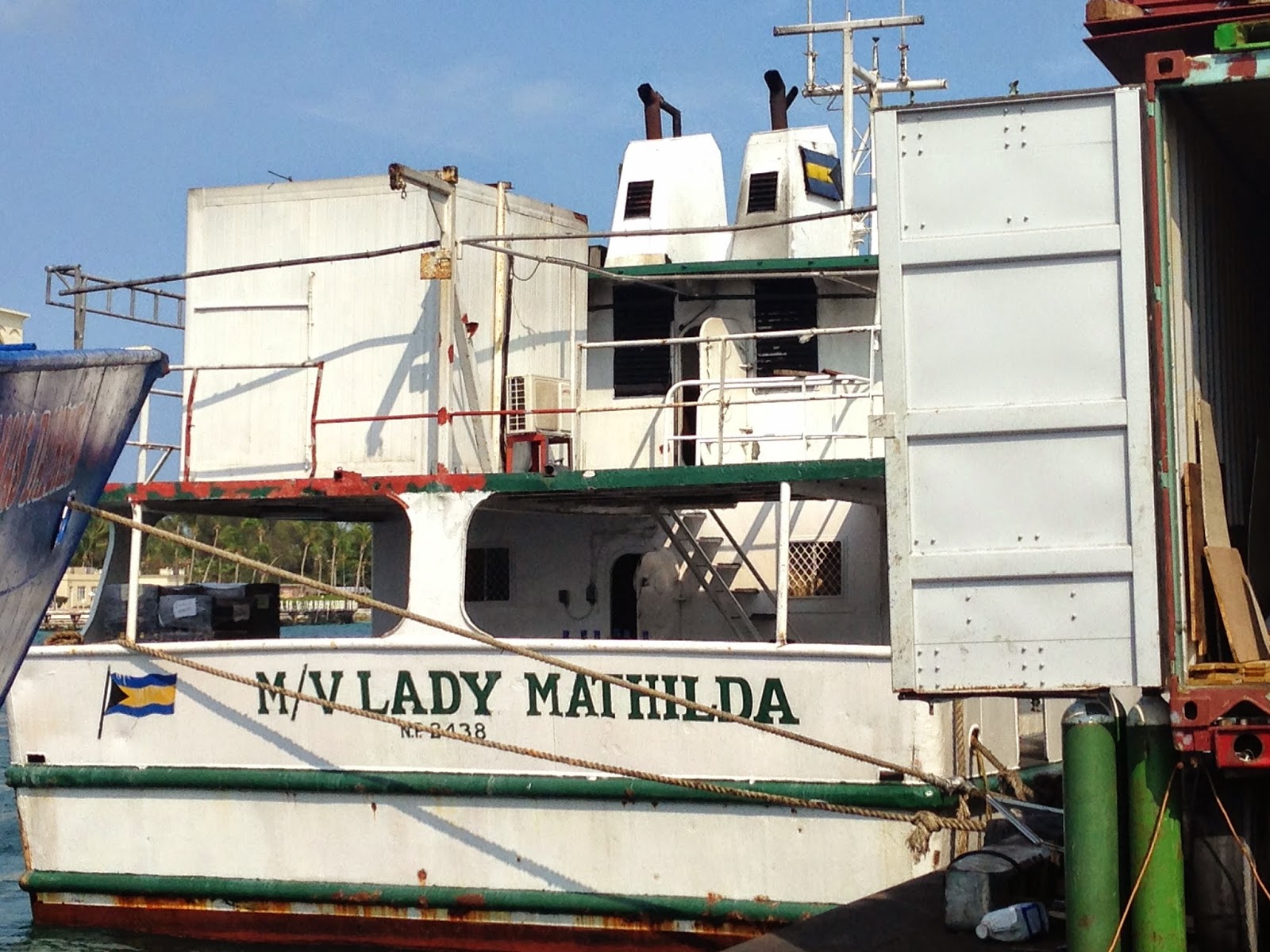 Transom view taken on a different month, showing one freezer box missing, and two funnels, each with a Bahamian flag on it. This photo was taken on March 27th, 2015, some 9 months after the previous one, and you can see that there is some maintenance painting being done to the deck and railings (red anti-rust paint). 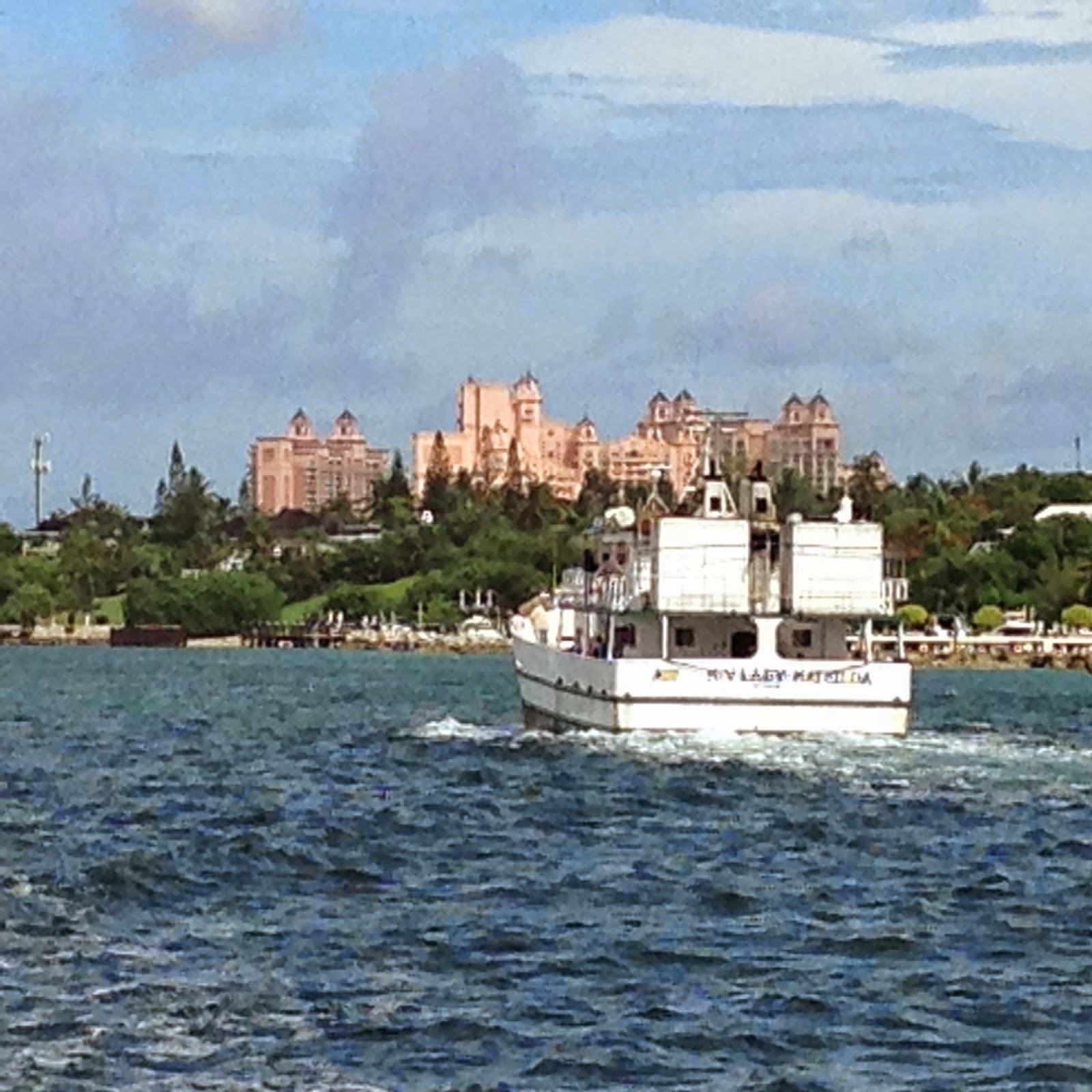 M/V Lady Mathilda heading home with both freezer boxes, arriving in Nassau after a long passage of 1.5 to 2 days from Inagua. July 2014. You can see that her docking lines are already out preparatory for a return to Potter’s Cay a few minutes after this photo is taken. Atlantis, Paradise Island, in background, facing West. 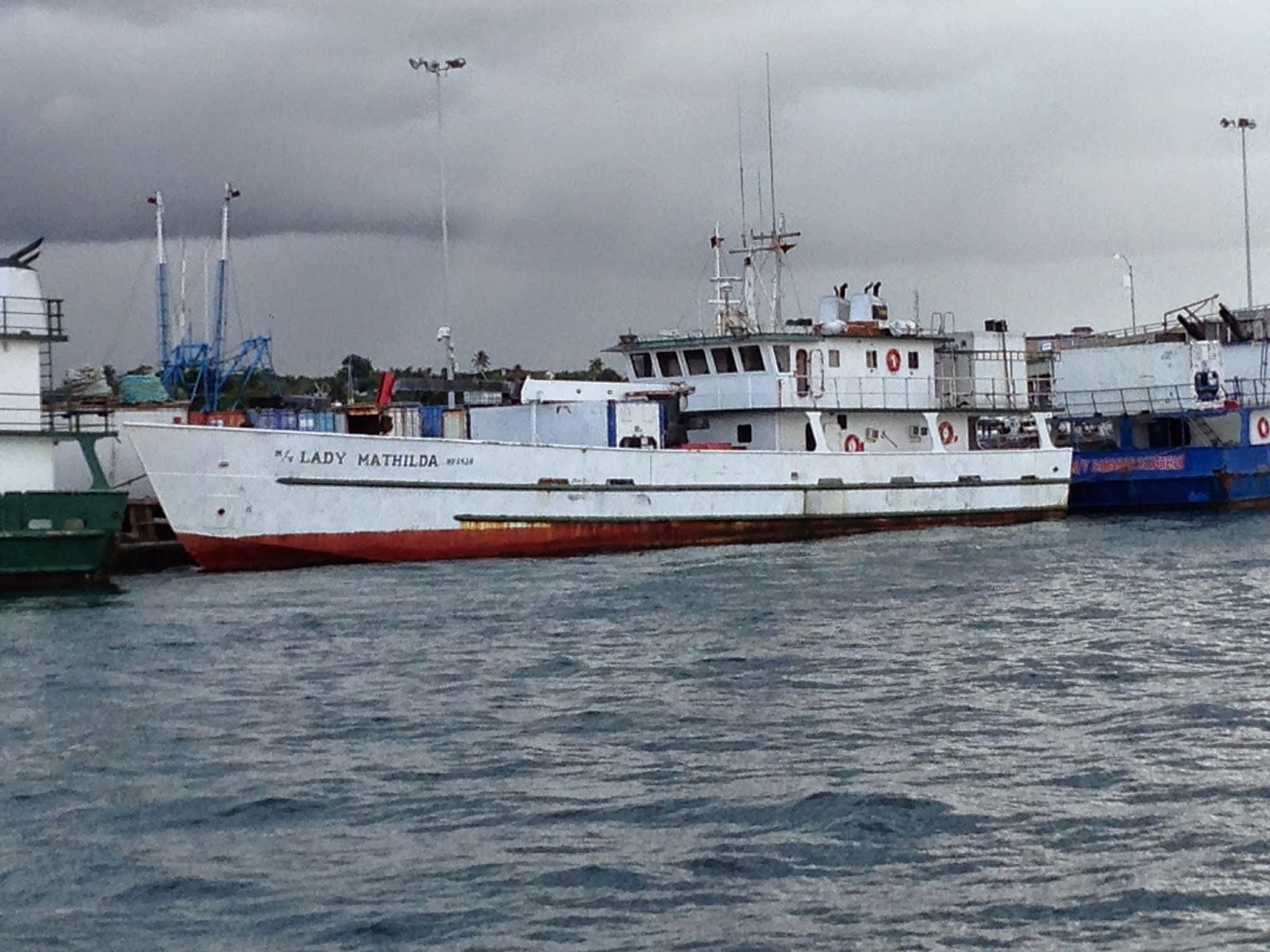 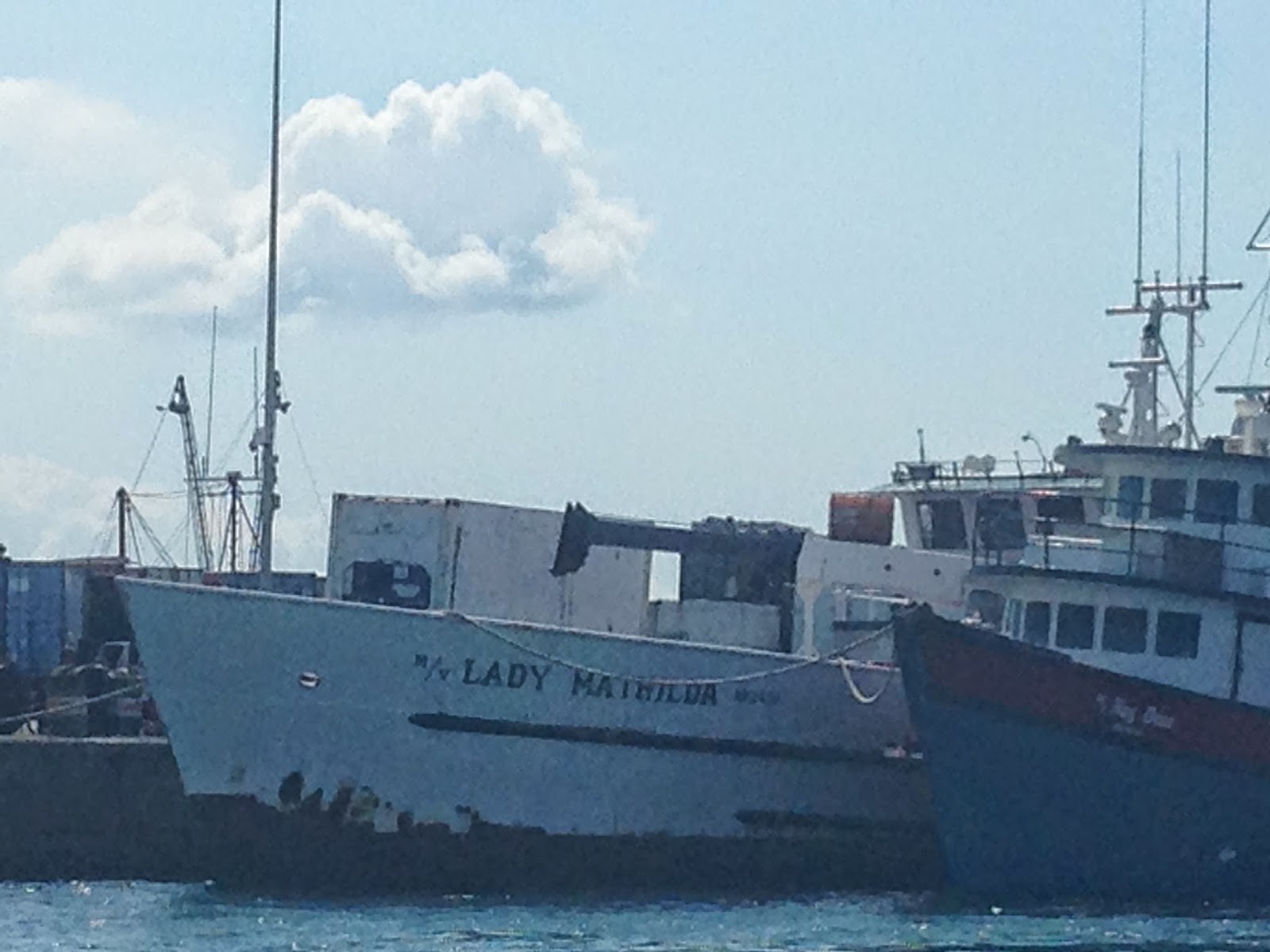 Tucked inside of the M/V Nay Dean due to a shortage of workable waterfront, July 2014. 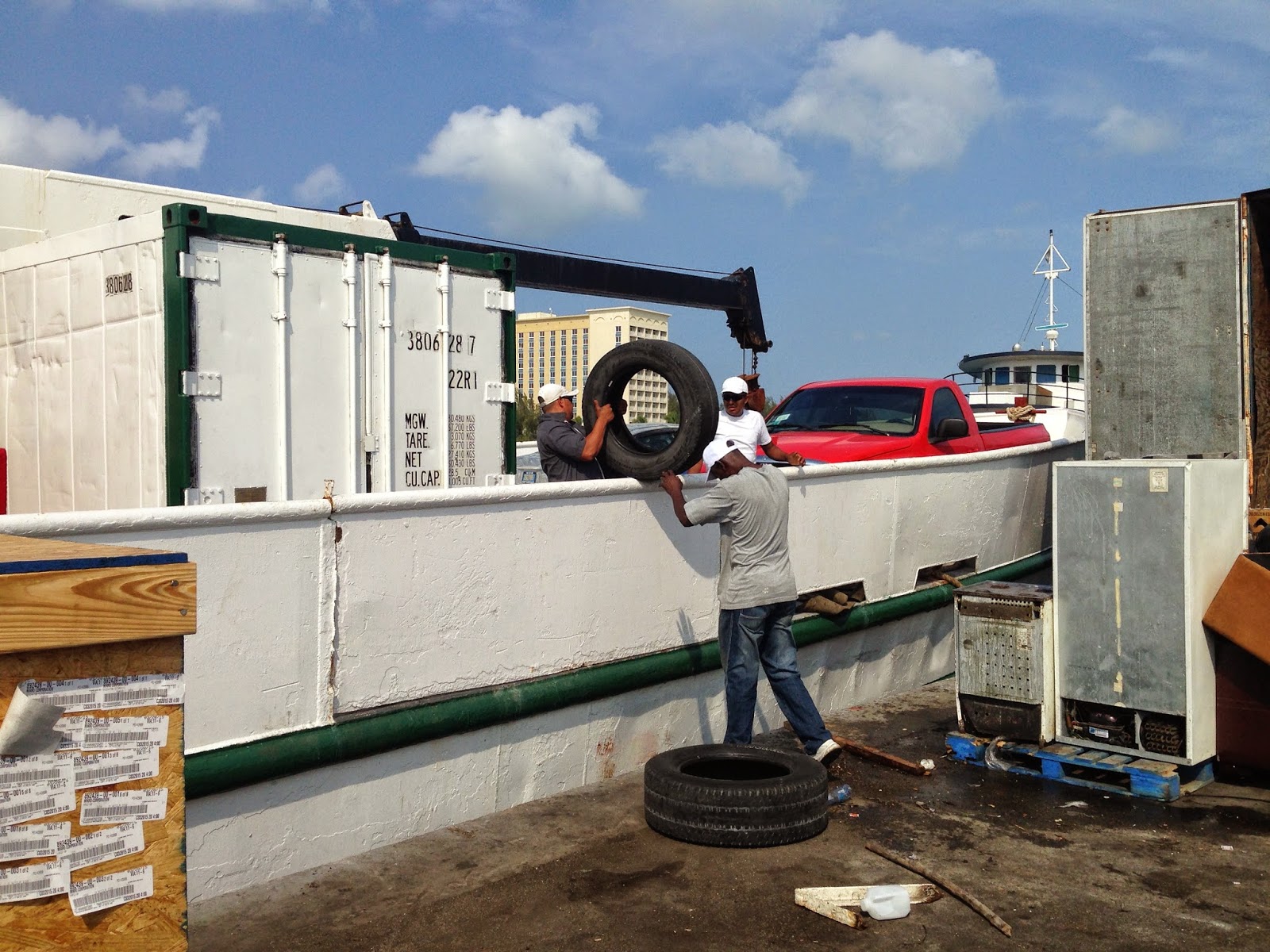 Loading car tires and other cargo such as appliances aboard M/V Lady Mathilda prior to a voyage south, Friday 14th March 2015. Note the cargo derrick, or crane, and container and truck on deck. This is the moment that an item is entrusted to the care of the officers and crew of the vessel. There will be a vehicle owner relying on the safe delivery of those tires hundreds of miles to the South. 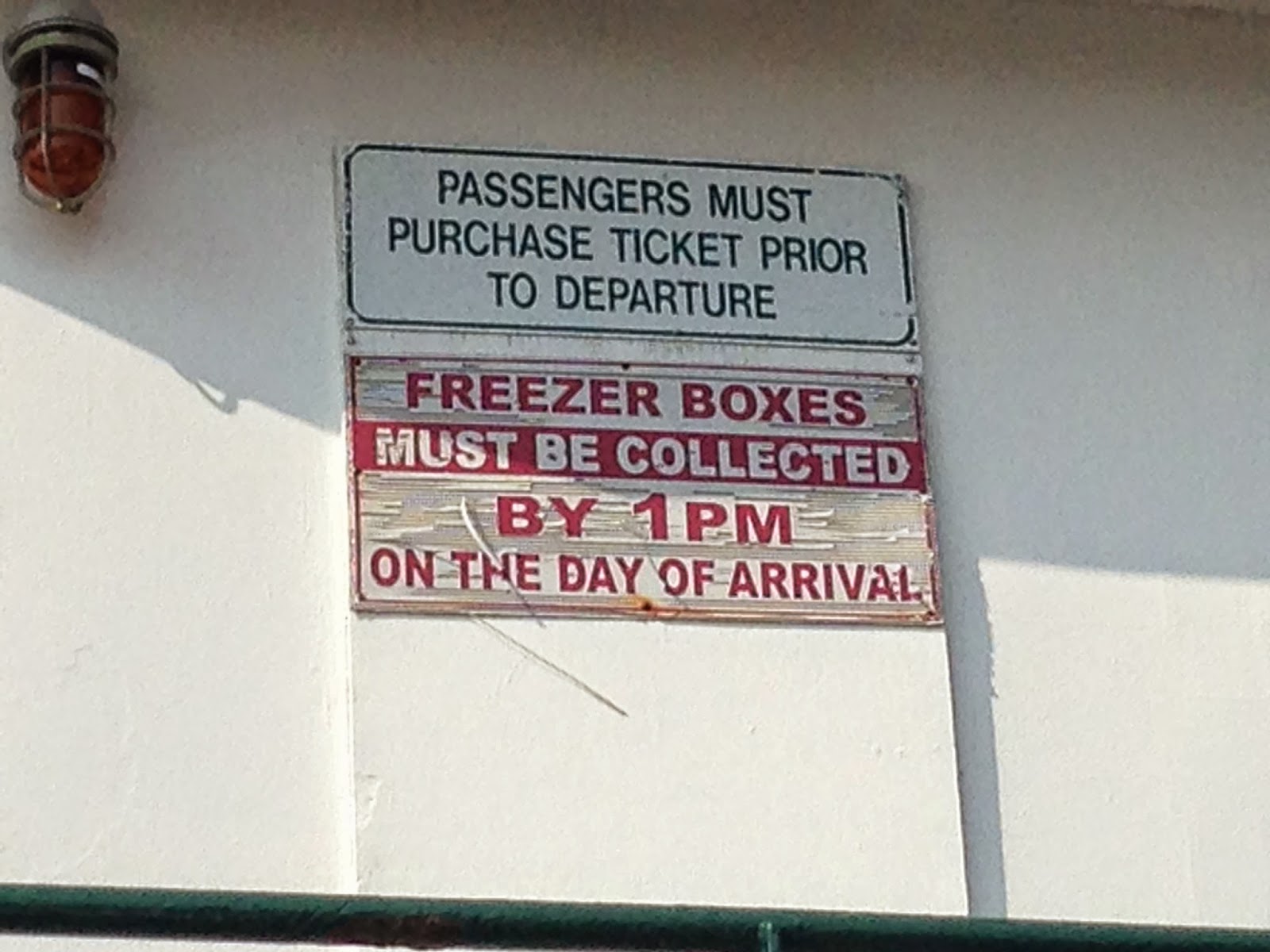 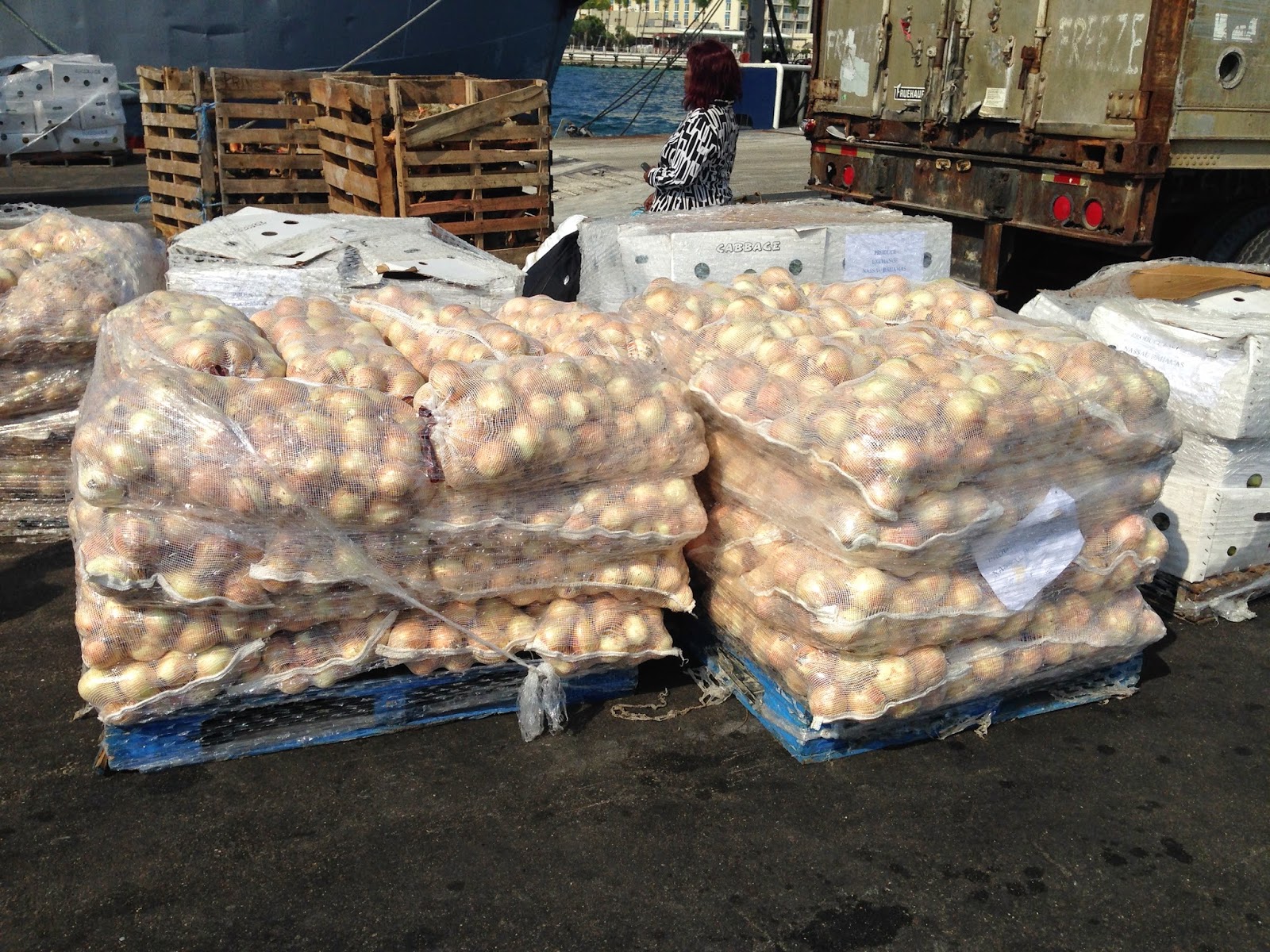 Fresh produce – in this case large onions grown in Andros – unloaded safely from the mailboat and awaiting distribution and retail in the capital, near the Lady Mathilda, with the M/V Lady Rosalind II, grey hull, in background.
NOTES: I found a charming school riddle for Bahamian students using actual mail boats!
“The table blow shows the amount of miles traveled by various Mail Boats. Read the chart then answer the questions that follow. Mail Boat January February March Captain Moxey 647 445 499 Lady Mathilda 467 623 649 Emmitt and Cephas 632 752 478 a) Which boat traveled the least amount of miles?______ b) Write the names of the mail boats in order from greatest to least to show the amount of miles they traveled._______ ________ ________ c) How many more miles did the Lady Mathilda travel than the Captain Moxey?________ Answer: a) Captain Moxey b) Emmitt and Cephas Lady Mathilda Captain Moxey c) 148 mile
Commonwealth of The Bahamas Ministry of Education Primary School Mathematics Curriculum Guidelines Grades: 1-3 Department of Education September 2010″
I travelled on the mailboat “Lady Mathilda” in 1996 and we stopped at Fortune Island for an evening of beers music with some of the Captain’s friends. I brought my guitar and we played this song nonstop for about 45 mins while the people (12-15 of them) danced, drank, played dominoes and joined in the music on saws and drywall buckets! One of the best nights of my life!
Source: http://gnti.ru/Mama+lay+lay+lay-+Tony+Seymour/1vVPd93JMMM
A “Southeast Shipping News” article in May 2011  states: “However, Neko Grant, minister of works and transport, who has responsibility for the industry, said the Government will make “alternative arrangements” if mailboat operators persist in their strike action to ensure that residents in the Family Islands “do not suffer” from the supply-chain bottleneck.
Mr Grant revealed the Government’s position in an interview with Tribune Business yesterday afternoon, following a meeting with mailboat operators in the morning. Around 12 mailboats are understood to be engaging in the strike, and sources yesterday told this newspaper that “there will be no sailing until there is some positive intervention” by the Government over fuel costs faced by the industry.
As he confirmed the Government’s position yesterday, Mr Grant provided this newspaper with details of the more than $8 million in subsidies paid at present on an annual basis to 22 inter-island mailboat companies. The subsidies see all mailboats receive a minimum of around $5,000 a week in subsidies and, for some, such as the Lady Matilda, which services Mayaguana and Inagua, $15,368 a week.
“We are paying a hefty sum to each of these mail boats on a weekly basis. We are unable to increase it at this time,” Mr Grant said.”
Source: http://seshippingnews.typepad.com/south_east_shipping_news/2011/05/export-and-market-opportunity-for-miami-river-carriers.html
On 11 Dec 2010 the Mathilda was reported by the Nassau Tribune to have caught fire from welding work being done after she came out of dry dock. There was no cargo on board. Pirate’s Well International “with four others” was described as the owner. The ship was estimated to be worth $1.5MM and was insured by Lloyds of London. Operations continued unhampered by the fire, which was quickly extinguished by three fire-trucks. Ironically they had trouble filling their tanks.
Source: http://ufdc.ufl.edu/UF00084249/01704/2x?vo=11&vp=0,1447
In April 1996 Conde Nast Traveler author Henry Shukman published an article entitled “A Slow Boat to Cat Island” about a voyage on the Lady Mathilda. It is in Volume 31, Issue 4, page 118 and “Presents travel information on the Bahamas.”
On October 16, 2012 during nighttime cargo and passenger disembarking, a car accidentally backed into the harbor off Potter’s Cay with the driver in it. Fisherman Edward Johnson dove in but could not open the door before the car was too deep for him. Officers and crew of the Lady Mathilda used their crane to assist the police in extracting the car from the water, but police were still looking for the body of the driver the following day.
Source: Bahamaslocal.com “Car Goes Overboard at Potter’s Cay” Oct. 17, 2012.