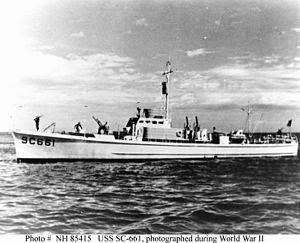 Photo of US Navy submarine chaser USS 661, sister vessel to USS SC 541 which became USCG Air Drake, then the Bahamian mailboat Drake in the 1950s and 1960s.

CONSTRUCTION: steel
YEAR BUILT: launched 11 April 1942 by US Navy, sold to US Coast Guard 31 October, 1945, sold by them on 2 February 1948, presumably to private interests, possibly directly to Sir George Roberts
BUILDER: Robinson Marine Construction, Benton Harbor Michigan, USA
EARLY CAREER: Served in the US Navy during World War II, 1942 – 1945, then US Coast Guard. Sold in 1948/9 to Thorton & William Lawson of New York, NY, as the 123-ton fishing vessel Drake. In 1954 sold to the Crosland Fish Co. of Marathon Fla. and based at Key West as the Drake. In 1956 sold to Bahamian ship owner Sir George W. K. Roberts, who had brought the two sister ships M/V Air Pheasant and M/V Air Swift. The Drake was then flagged to Nassau, Bahamas.
BAHAMAS CAREER: Between 1956 and at least 1964 operated as a government-subsidized fast mail boat between ports including the Nassau to Rum Cay and San Salvador run (see Note below)
CAPTAINS: not known in Bahamas, but in the US Navy by Lt. Junior Grade Oscar L. Otterson, US Naval Reserve
FATE: not known
OWNERS: Sir George W. K. Roberts, Nassau Bahamas (before him USN, USCG, Lawson, Crosland, per above “Early Career”).
NOTES:
Here is a reference to a number of mail boats in 1964, including the Air Swift, from Benedict Thielen, author of an article entitled “The Bahamas – Golden Archipelago”, published in Holiday
December 1964, pp. 62- 73, 135-140, from the blog “Bahamian Fragments – Bits and Pieces of Bahamian History”. http://www.jabezcorner.com/Grand_Bahama/Informal1.html
“Among the sloops are the mail boats, high-sided, clumsy and fancifully colored as a child’s drawing. They carry cargoes of rum and beer, oil drums and tractors, crayfish pots, cows and sometimes grand pianos. The Air Swift has come from Eleuthera, the Lady Dundas from Cat Island. The Church Bay is bound north for Grand Bahama, the Drake far south to Rum Cay and San Salvador. Coming and going, they and others like them call at little settlements like Palmetto Point and Eight Mile Rock, Savannah Sound and Castle Island, Pleasant By and Pure Gold.”

For the background of other private owners of the Drake, World War II U.S. Navy Vessels in Private Hands: The Boats and Ships Sold and Registered for Commercial and Recreational Purposes Under the American Flag Paperback – May 14, 2014, By Greg H. Williams