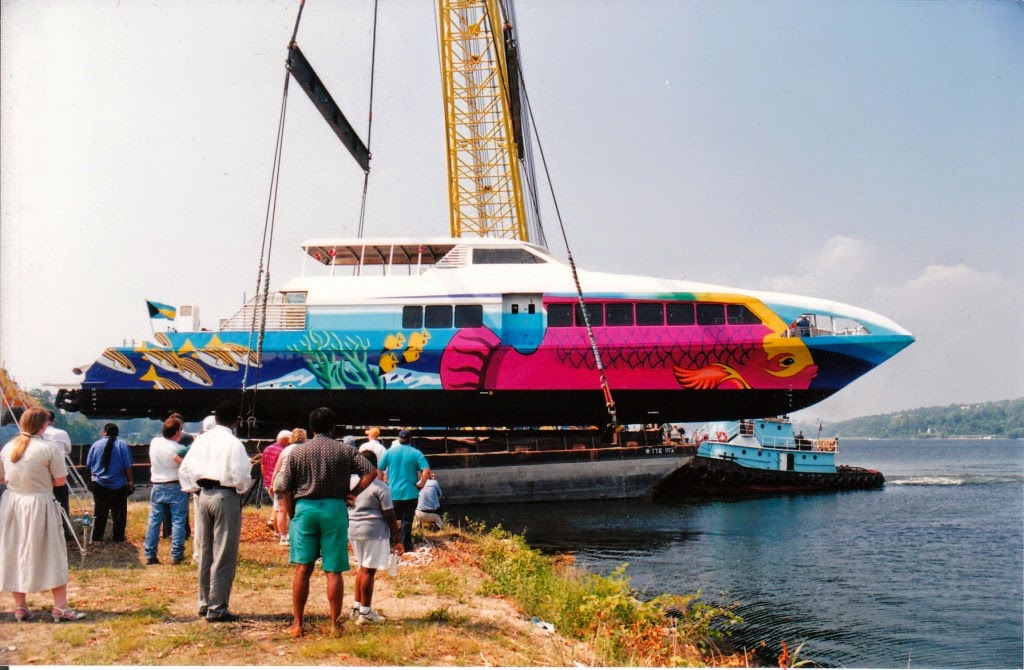 MAILBOAT NAME: M/V Bo Hengy
PAST NAMES: none / PRESENT NAME: M/V Red Jet 5
DIMENSIONS: passenger ship,  115 feet long, 27.5′ beam, draft said to be 5′, catamaran hull, 209 gross tons, 74 net tons, capable of 177 passengers. Powered by MTU engines, 4,726 horsepower. Bahamas flag. IMO #  8954415.
CONSTRUCTION: aluminum
YEAR BUILT: 1999
BUILDER: Pequot River Ship Works, New London, Connecticut USA, hull # 5
EARLY CAREER: traded in Bahamas since it was launched
BAHAMAS CAREER: served Spanish Wells and Harbour Island’s Dunmore Town, North Eleuthera, daily.
CAPTAIN: several – said to include Capt. Moss, formerly skipper of the M/V Bahamas Daybreak III
FATE: in May 2009 after ten years of service was sold to the Red Funnel Group of Southampton UK for service to Cowes, Isle of Wight, across the Solent Channel in the UK. This reverses the usual trend whereby many vessels were acquired second-hand from Europe and sold on to Latin America.
OWNERS: Bahamas Ferries Ltd., Potter’s Cay, Nassau, NP Bahamas
NOTES: On a personal note, I lived in Newport Rhode Island, in 1999 and there was a financial downtown when the internet bubble burst, and yet the fitting out of the Bo Hengy in New London Connecticut provided work for friends of mine including Billy, Glenn and Leonard, when times were tough and they had young families to support. As I recall, a van would take them from Newport about 5 am for a roughly 1.5-hour drive, and they would install insulation all day….. Small world indeed. They knew at the time that the vessel was being fitted out for Bahamas service. And it was only the 5th hull built by the Pequot builders. 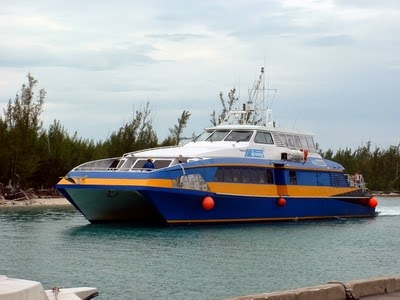 Said to be named after a Harbour Island shipwright Henry Sawyer, known as “Bro Henry” which then became Bo Hengy, who on top of wooden vessels made fish traps and tools for fishermen and spongers in the 1920s. In 1922, authors Anne and Jim Lawlor write in their book “Harbour Island Story,” “…built the first 5-horsepower motor boat in Harbour Island.” (Macmillan Caribbean, p.149).

It is fair to say that the Bo Hengy revolutionized waterborne travel in the Bahamas, cutting down in travel times radically and upgrading the degree and level of comfort exponentially. Also the boat always left on time.

During the London Olympics in 2012 the Red Jet 5 was chartered for use during and for the games. 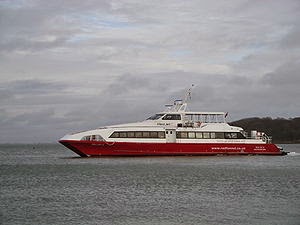