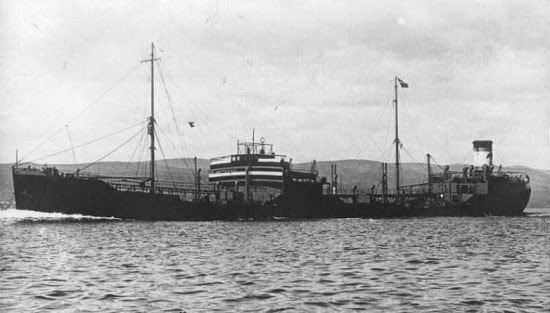 The British motor tanker San Arcadio sunk by U-107 under Gelhaus northeast of Bermuda on 31 January 1942.
Photo source: http://www.uboat.net/allies/merchants/ships/1306.html
The British tanker San Arcadio was built by Harland and Wolff, Limited of Govan, Glasgow in April 1935. Yard number 938, she was 7,419 gross registered tons, could carry 11,275 tons of petroleum, was 465 feet long, 60 feet wide and 19 feet deep. An eight-cylinder diesel engine turned one propeller with 3,500 b.h.p to achieve a speed of 12 knots. The ship was armed with a four-inch gun, a 12-pound gun, two Hotchkiss machine guns, two Lewis machine guns and a single strip Lewis. San Arcadio was also equipped with degaussing equipment as a defense against mines or torpedoes.
The ship was owned by the Eagle Oil and Shipping Company Limited of Finsbury Circus, London. There were 20 tankers in the fleet, all beginning with the prefix “San.” The Texas newspaper Port Arthur News had her sailing from the Gulf of Mexico to the UK on the 9th of January, 1939. The San Antonio Light of December 10th1939 reported that she arrived in Convoy HFX 14 at Corpus Christi Texas. It noted that Captain Flynn would “never know until 24 hours after they sail from the port here where the convoy will be located.”
The ship participated in 39 convoys during World War II, many of them between Liverpool and Halifax. In December 1941 she left Liverpool in Convoy ON 42 bound westwards. The convoy was dispersed and she proceeded independently for Houston Texas to load oil for the UK via Halifax.
There were 50 men aboard the San Arcadio on her final voyage, of whom five were Royal Navy or Army gunners. The master was Captain Walter Frederick Flynn, aged 41. He was supported by Chief Officer William Thomas Douglas, 34, and Second Officer Clement Jerwood, 24. The Third Officer was Joseph Ross Stephen and the First Radio Officer was George Wilfrid Watson. Mess Room Boy William Whyte was only 15 years of age, and Cadets Victor Byron Pitt and Roye William Patrick were each 18. The Sixth Engineer Officer was William Boyd Docherty, aged 19.
After arriving in Houston in January, 1942 the San Arcadio loaded 9,900 tons of petroleum product: 6,600 tons of gas oil and 3,300 tons of lubricating oil. On Thursday the 22ndof January the ship sailed for Halifax where it intended to join a convoy back to the UK. On the following Wednesday, 28th January, the ship was struck by suck severe weather that it broke off zig zagging. The ship and men weathered the storm for three days and finally on Saturday the 31stof January they were able to resume zig zagging at 10:00 am local time.
Twenty minutes after resuming the defensive maneuver the ship was struck by a torpedo fired by the German Navy commander Oberleutnant zur See Harald Gelhaus, 26 years of age, in command of the submarine U-107. At about 10:45 (according to German records) and 10:20 according to the British account), the torpedo struck aft near the number one tank, about 300 feet from the bow and on the starboard side. The ship was then about 340 nautical miles northeast of Bermuda and 330 nautical miles southeast of Nantucket. There was a heavy ocean swell at the time with a wind from the north-northwest at about 20 knots. The ship had been steering northeast and making about ten knots. 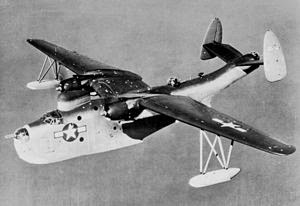 A Martin PBM Mariner of the type which rescued 9 mariners from the San Arcadio in February 1942 and took them to Bermuda.
Photo source: http://en.wikipedia.org/wiki/Martin_PBM_Mariner
Unbeknownst to the survivors, their rescuers assumed they were a U-boat and actually dived in for an attack. The airplane’s identifying number was 74-P-7 and it flew for the 74thSquadron, based in Bermuda. The pilot was US Navy Lieutenant Joseph Abraham Jaap. In October 2014 Lt. Jaap’s son wrote that Jaap “thought he had spotted a German submarine and began a run. When he got over the target he realized it was a life raft. At that time there was a significant sea state and he was afraid if he landed they would all be lost but he had no choice.” Stephens relates that “The flying boat alighted on the water close to the boat and we pulled over to him. [We] got on board…”
Jaap’s son continues: “After they got the sailors aboard he had difficulty getting airborne. The waves kept knocking the plane down. Finally, after a few “Our Fathers” he took off. After the war Life Magazine commission some war artists to paint pictures of WWII events. For some reason his rescue was picked and the painting “Rescue Off Bermuda” was in Life Magazine and now is at the museum in Pensacola” Florida.
Stephens carries on the narrative of the rescue: “[We] were taken to Bermuda. In the ‘plane we were given only a little water to drink, as the crew of the aircraft had received wireless instructions from Bermuda that they were not to give us food of any kind.” He describes landing at 6:00 pm local time. All nine men were taken to King Edward VII Memorial Hospital and treated for swollen feet “and general weakness.” He said that the men “…had salt water sores on their bodies and limbs.”
Apparently Golightly, a pillar of support to Stephens, had recently undergone surgery for the Piles, and during the voyage “his strength finally gave out,” however he remained upbeat and never complained, and was a role model for the other sailors and gunners. Stephens said that four men were discharged from hospital and that “the other” four were held back for varying periods.
This brings up a contradiction in Stephens’ account: he is consistently emphatic that eight men total were in the boat (starting with he and one other man being rescued by a boat with only six men in it). But all other accounts – by the US Navy, by the press, and a list of 41 dead (leaving 9 survivors, not eight) – refer to nine men being rescued by Lt. Jaap. The contradiction remains unresolved, except that of all witnesses, Stephens ought to have known how many were in his boat. The only explanation is that Stephens was referring to the eight other men in the boat, or in the hospital, besides himself. 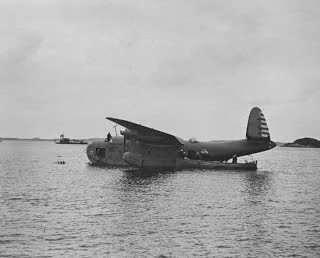 The caption for this photograph, which is in the National Archives and Records Administration (NARA) in College Park Maryland, reads: “VP-74 PBM Mariner piloted by Lt Joseph A. Jaap delivering survivors of the S.S. San Arcadio to Bermuda on Valentines Day [it was actually February 11], 1942. Jaap was awarded the DFC [Distinguished Flying Cross] for the open-sea landing that rescued nine sailors of the British tanker.” It continues, from the War Diaries in Record Group 38: “74-P-7, Lieutenant J. A. JAAP commanding found nine survivors in position 34-28N and 62-50W. The plane landed at sea, took the personnel aboard and returned them to Bermuda. As a result of this action Lieutenant Joseph Abraham Jaap, USN, was awarded the Distinguished Flying Cross.”
Photo source: Tracy White, blogger, http://researcheratlarge.blogspot.com/2013/09/random-photo-pbm-mariner-rescue-1942.html
The British Admiralty War Diary for Foreign Stations of 11 February states that “U.S. Naval plane picked up 9 survivors from S.S. SAN ARCADIO. ….Senior survivor is 3rd Officer J.R. Stephens who states that he believes they are only survivors.” A CP Cable story of 14th February was headlined “Plane Rescues U-Boat Victims,” and leads with “Nine survivors , rescued from their lifeboat by a United States plane which made a daring landing in the Atlantic 160 miles off Bermuda, said yesterday an enemy U-boat fired two torpedoes into their British tanker off the American coast… Jan. 31.”
The wire story continues: “…the men said 40 of their ship-mates escaped from the tanker in tto other boats. One other member of the ship’s crew was drowned while leaving the ship.” The article goes on to say that all survivors were British. The local Bermudian papers do not appear to have covered the arrival of these men, perhaps because the group was small, perhaps because they were landed by the military and not a civilian ship, or simply because they were one of the first batches of survivors to land and censorship applied. The San Arcadio survivors were only the second batch, after those of the Empire Wildebeeste landed just over two weeks before, to be landed in the colony from ships sunk nearby.
SOURCES:
Fold3.com – for the war diaries and deck logs and Eastern Sea Frontier and NOB Bermuda
Holm Lawson, Dame Sir, www.warsailors.com
Jordan, Roger, The World’s Merchants Fleets 1939, Naval Institute Press, Annapolis, MD, 1999
Lethbridge Alberta Herald, February 13, 1942, “Rescue Sailors from Torpedoed British Ship.”
Mason, Jerry, www.uboatarchive.net
Mozolak, John, “New York Ships to Foreign Ports, 1939 – 1945,” http://janda.org/ships/
Newspaperarchive.com for the articles from the Associated Press
Uboat.net for much of the information, including photos of U-boat Commander and its victim, http://www.uboat.net/men
White, Tracy, blog of NARA photos, comment by Lt. Jaap’s son, http://researcheratlarge.blogspot.com/2013/09/random-photo-pbm-mariner-rescue-1942.html
Winnipeg Free press, Saturday, February 14, 1942, “Plane Rescued U-Boat Victims,” from www.newspaperarchive.com
Wrecksite.eu for specifications and history
Wynn, Kenneth, U-boat Operations of the Second World War, Volume 1 and Volume 2, 1997