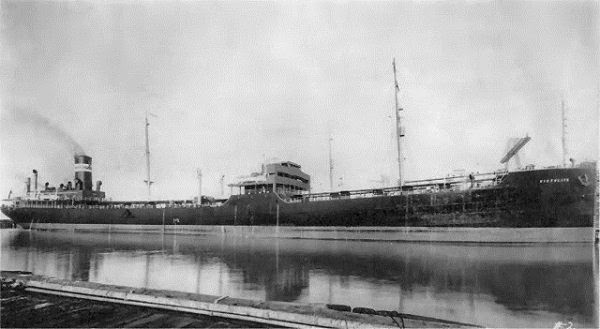 Motor tanker Victolite at berth. Two lifeboats are visible aft, by the funnel. A traditional barrel-shaped crow’s nest for a lookout is visible on the foremast – the larger masts would have been to support the radio aerials, and the smaller, stockier ones behind the bridge for handling cargo hoses at the manifolds. The raised platform between the bridge, forepeak and engine area and crew accommodation aft served, among other things, as a walkway for the crew.
Photo Source: http://www.uboat.net/allies/merchants/ships/1328.html, courtesy of Donald A. Baker, also http://www.aukevisser.nl/others/id499.htm
The motor tanker Victolite was built by the A. Stephens and Sons Limited shipyard in Linthouse, Glasgow, on Scotland’s River Clyde. Launched on the 28th of November 1927 and completed in March 1928, this was the 517th vessel built by the yard. Her only owners were the Imperial Oil Shipping Company Limited of Toronto, who commissioned the modern vessel. This firm was in turn a subsidiary of the Standard Oil Company of New Jersey. At the outbreak of war there were nine ships with the “olite” naming convention. The ship was registered to Montreal, Canada – Auke Visser, an expert on tankers, states on his site that the vessel was steam-propelled, however other sources (Uboat.net, Wrecksite.eu) list the engines as diesel.
The tanker’s dimensions were 510 feet in length, 68.2 feet wide, and 38.1 feet deep. Two diesel engines were built by Friedrich Krupp Germaniawerft A.G. (Germania Krupp), in Germany. They developed 995 net horsepower and turned two propellers to move the steel ship forward at 11 knots. According to a contemporary article heralding the design innovations, the Victolite was built “on the Isherwood ‘bracketless’ system, which by elimination of the brackets connecting the longitudinals at the bulkheads greatly simplifies construction and reduces cost of upkeep.”
The same article went on to say that “…the Victolite will run in summer months between Colombia and the St. Lawrence, while in winter they will probably be employed between the Altantic Coast and South American west coast ports via the Panama Canal.” The deadweight cargo carrying capacity was given as 16,000 tons, and the Sulzer-type engines were described as two four-cycle, two-stroke, “developing a combined horsepower of 3,300 b.h.p. at 100 r.p.m.” In another article each engine was listed as capable of developing 1,800 b.h.p. or brake horsepower.
Victolite was named for Victoria, in British Colombia, just as her sister ships were named for Canadian locales (Canadalite, Ontariolite, Vancolite, Trontolite, Montrolite, etc.). She was the second ship to carry the name for the same firm. In Canada there was considerable pride in this large and highly modern fleet of efficient vessels, as evidenced by the headline “Largest and Finest Oil Tankers Sail Under Canadian Ensign,” in the Brandon Daily Sun, September 21st, 1928. In the article the Victolite is listed as being capable of carrying 15,600 tons of petroleum.
The “Kingston Gleaner” of Jamaica for April 24th 1930 records how another Canadian vessel, the passenger and cargo ship “Lady Hawkins,” went to the aid of the Victolite. On February 27th 1930 the Victolite sent out an emergency wireless message stating that the ship’s engineer Norman Buckley, of Dublin and Halifax, had appendicitis and required urgent medical attention. The master of the Lady Hawkins, Captain Manning altered course by 100 nautical miles and picked up Mr. Buckley, taking him to St. Kitts in the Caribbean, where he was operated on. (The Lady Hawkins was subsequently attacked and sunk by U-66 under Richard Zapp between Hatteras and Bermuda on the 19th of January, 1942 with the tragic loss of 251 lives).
During World War II the Victolite participated in roughly a dozen convoys. The outbreak of war found her arriving in Montreal and by October 19th 1939 she called at Bermuda in transit for Jamaica and Aruba. She returned to Bermuda on November 4th en route to Halifax, sailing independently. Other voyages took her to France, the Mediterranean, North Africa, the UK, and Philadelphia and New York in the US. From August 1940 to February 1942 the ship was dedicated to sailing independently between the Caribbean basin (Colombia, Venezuela, Trinidad, Aruba, for example) to ports in the northeast, from Norfolk Virginia to Halifax and Montreal.
On her final voyage the Victolite set out from Halifax on Thursday the 5th of February bound for Las Piedras, Venezuela. She had just completed a laden passage from Caripito, Venezuela (for cargo) and Trinidad (for bunkers, or engine fuel), between the 21st of January and the first day of February, and was heading back down south without any cargo, but rather with just ballast water in her tanks.  Las Piedras is located on an isthmus of land between Lake Maracaibo, Venezuela, and Aruba, Dutch Antilles.

Canadian Captain Peter McLean Smith, aged 45, was the Master of the Victolite at the time. He was responsible for a total complement of 47 men, of whom two were Gunners manning the ship’s defensive weaponry, usually consisting of a large 4-inch artillery gun, possibly with a smaller 12-pound gun and a number of mounted and hand-held machine guns. With the exception of two men (Gunner John Richmond Archer Lawson, aged 29 and British, and Engine Wiper Fritjof Søderberg, aged 27 and Norwegian), all of the crew were Canadian nationals. There were six teenagers aboard, all but three of them 19 years of age. The youngest was Engine Wiper Daniel Ralph Stone, aged 16, followed by Saloon Messman Charles H. Tooker and Ordinary Seaman Gerard Roy Martell, both aged 17.

There were 25 men who were aged in their twenties, including the other Gunner, William Manzell, an Able Seaman in the Royal Canadian Navy. The oldest man on board was Antoine J. Arsenault, a boilermaker – he was 49.  The senior officers assisting Captain Smith were First Officer David Propert Harries, aged 39, Chief Engineer Officer Neil Munro, aged 40, Second Officer Joseph Albert Ouellet, aged 26, and Third Officer Harold Frank Getson, aged 23. The Radio Operator was Frank G. Taylor, aged 28.

By the afternoon of Tuesday the tenth of February Captain Smith and his men had made it to a point 260 nautical miles north-northwest of Bermuda, 400 miles east of Cape Hatteras, 400 miles southeast of New York, and 325 miles south-southeast of Nantucket. This position is 42 miles southeast of the Caryn Seamount. At that time and in that place the hapless tanker sailed across the sites of the German submarine U-564 under the command of the aggressive veteran skipper then-KapitänleutnantReinhard Suhren. 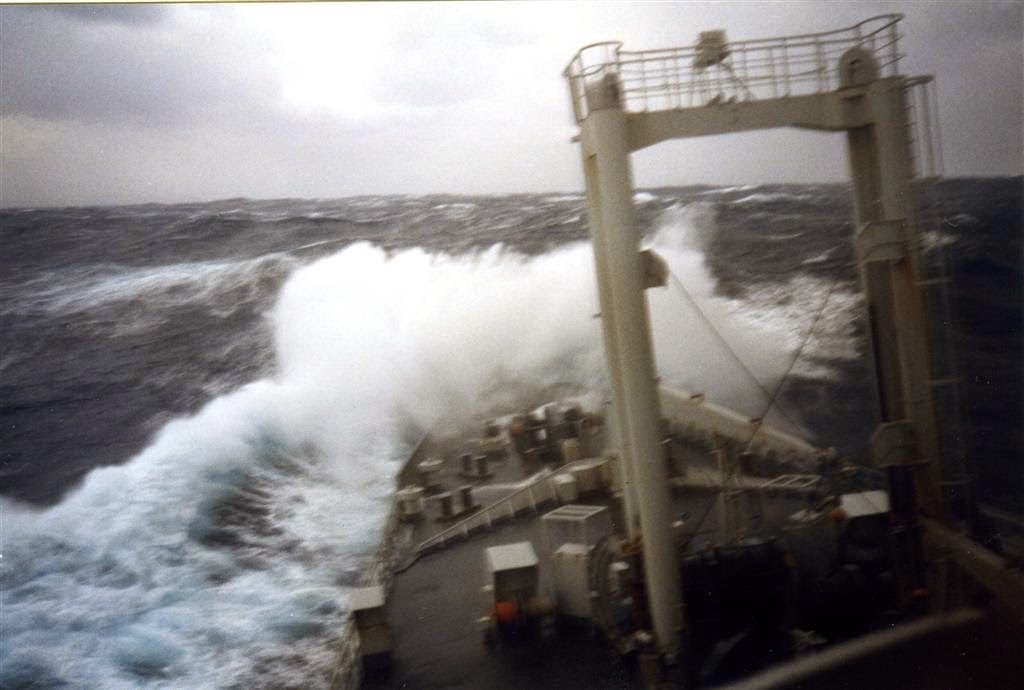 This photo was taken less than 15 nautical miles from the location where the Victolite was sunk. It shows conditions as taken from the ship A/B HrMS Zuiderjruis (A-832). There is no indication that conditions were this rough for the men of the Victolite when they abandoned ship, nor how long they survived in their boats, but it is forseeable that the longer the drifted the greater their chance of encountering this kind of weather – potentially fatal to men in open boats – in February in the North Atlantic.
Photo source: submitted to Google earth by jorrit73 of the Dutch Navy on 3 May, 2011. http://www.panoramio.com/user/4147750
Reinhard “Teddy” Suhren (later Fregattenkapitän and holder of the Knights Cross with Oak Leaves and Swords), entered the Bermuda area on the eighth of February 1942 and attacked two ships during eight days in the region – the other being the Opalia on 16th February. Suhren was heading west to Hatteras U-at the time he and his officers and crew came upon the zig zagging Victolite.

U-564 under Teddy Suhren transferring a torpedo to U-154 in the Caribbean region, Spring, 1942
Photo source: http://forums.ubi.com/showthread.php/573474-A-Picture-a-Day-Take-a-Photo-Post-it-and-Share-it-Part-Five-Forums, the collection of Celeon999
Returning to the area off Bermuda on February 15th, Suhren managed to damage the tanker Opalia (British, 6,195 tons) with gunfire north of Bermuda on the 16th. The same day U-564 received fuel from U-107 north of Bermuda. Then the following day the sub left the area heading east to Brest, where it was part of the 1st U-boat Flotilla. The patrol began in La Pallice on the 18th of January and ended in Brest on the 6th of March.
Suhren is the author of an autobiography named Ace of Aces. In an extraordinarily successful career he attacked 23 ships and sank or damaged 125,351 tons of Allied shipping. He served aboard U-564 from June 1941 to July 1942, for 284 patrol days. Later in the war he served as commander of U-boats in Norway and then the North Sea.

Suhren accrued 284 days on six war patrols over his career. His career total of 18 merchant ships sunk for 95,544 tons, four more damaged for 28,907 tons and a warship sunk for 900 tons would earn him the Knights Cross with Oak Leaves on the last day of 1941 and the ultimate accolade, the Crossed Swords in Fall of 1942, followed by the War Merit Cross Second Class with Swords in January 1944.

Suhren’s autobiography Ace of Aces is highly readable and his post-war business career (starting with running a beer garden in the ruins of Hamburg) makes him a memorable commander. A Kapitänleutnant on his first voyage to the Bermuda and the Bahamas, he would end the war as a Fregattenkapitän in command of all U-boats in Norwegian waters and later the head of the North Sea region for the Führer der Unterseeboote (FdU, or Karl Dönitz). He served on U-564 between April and October 1941 – the boat was subsequently lost in the Bay of Biscay under a different commander. Born in Taunus in 1916, Suhren lived until 1984 and the age of 68, dying in Hamburg where he had become a businessman.

Royal Canadian Navy Able Seaman Manzell is memorialized on the Halifax Memorial, erected there by the Commonwealth War Graves Commission, along with 2,846 other merchant sailors, soldiers, and nursing sisters who were lost at sea during World War II.

According to a government website there is a mountain in British Colombia Canada named for one of the victims of the loss of the Victolite. Mount Reid was “Named in memory of Canadian Merchant Navy Junior Engineer Officer John Royal (“Roy”) Reid, from Notch Hill  (near Salmon Arm); enlisted at Victoria in 1939, and served aboard several Canadian Merchant Navy ships; killed in action 10 February 1942 when his oil tanker “Victolite” – bound from Halifax to Las Piedras, South America – was torpedoed and sunk.” (Taylor, OBX History).

Constant, Alan R., Sinking of the Montrolite An Internet Odyssey of Discovery Uncovering the Story of a Fateful Night in 1942,” Tobermory, ONT, Canada, 2002