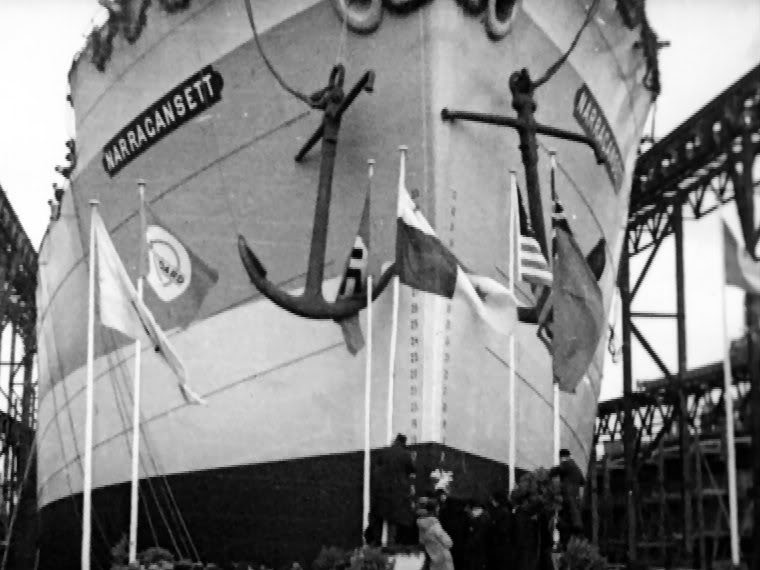 The British tanker Narragansett (1936 – 1942) at hear launching in Kiel, Germany in the spring of 1936. Note the flags of USA, Standard Oil, and Panama, all alongside the Nazi Swastika.
Photo Source: Auke Visser, http://www.aukevisser.nl/uk/id341.htm (Copyright IWF Wissen und Medien GmbH)
The British-flagged tanker Narragansett was built in Kiel, Germany by Friedrich Krupp Germaniawerft AG (also known as Krupp Germania) in 1936. She was completed in April. Hull number 540, her engines developed 912 net horsepower and turned a single screw – the diesels also built by Krupp. The tanker’s dimensions were 507 feet in length by 69.9 feet wide and 36.9 feet deep. The armed vessel was capable of 11 knots and weighed 10,389 gross registered tons.
Narragansett was named for a Native American tribe in New England, USA and for Narragansett Bay, Rhode Island, which was named for them. One of her sister ships in the same fleet, which was controlled by the Esso Corporation of London and Glasgow were named Seminole – others were named with the prefix “Inver” as in Inverpool. The ships were managed by Andrew Weir & Company with various subsidiaries, namely Bank Line, Inver Transport & Trading, and Inver Tankers.
Early in the World War II Narragansett was kept busy. In early February 1940 the men of the Narragansett rescued 76 officers and crew from the 9,874-ton Canadian steam ship Beaverburn which was sunk 150 south of County Cork, Ireland on the 5th of February by U-41 under Gustav-Adolf Mugler. The Beaverton men were landed in Falmouth England. Only one man perished.
Narragansett called at New York harbor several times: she arrived there on the 28th of December 1940, and sailed the 5th of January, the 23rd of July and the 7th of October, 1941. Doubtlessly she participated in numerous convoys shuttling precious oil from the US Gulf and the refineries at Aruba and Curacao over to England via New York and Halifax. These included HX 69, 15, 145, 118, 28, 105, and 130 and Convoy ON 17 carrying petroleum products from aviation spirit to diesel oil. On April 7 to 12 1941 she straggled due to engine trouble but was able to rejoin Convoy HX 118.
In the Spring of 1942 Captain Michael Blackburn Roberts, aged 41, was the Master of the Narragansett and he had 42 merchant marine crew as well as six naval or army gunners beneath him for a total complement of 49 souls. The youngest of these was Mess Room Boy Terence Norman Alderton, aged 16, but there were seven other teenagers amongst the crew. In addition to these were 22 men aged in their twenties, including Second Officer Arthur Edward Wallace, aged 28.
The Chief Engineer Officer was John Heslop, 33, and the Chief Officer or second in command was Denis Richardson, 35. All of the crew were British except for South African DEMS (Defensively Armed Merchant Ship) Royal Navy Gunner Stanley Dennis Gregory, aged 20 and Irish Third Engineer Officer Alexander Stanley Smythe, aged 32.
In mid-March of 1942 the Narragansett loaded a cargo of 14,000 tons of clean petroleum product in Port Arthur, Texas, for delivery to the UK via a convoy in Halifax. The tanker rounded the Florida Keys and headed up the Straits of Florida before passing west of Bermuda bound north. On the night of Tuesday 24th March 1942 she was 200 nautical miles northwest of Bermuda and 385 nautical miles east southeast of Cape Hatteras.
That was the position where the German submarine U-105 under Heinrich Schuch (who was later promoted to Fregattenkapitän) found her. His war diary or KTB records that at 9:37 pm German time (around 2:37 pm local time) his watch spotted a tanker on course 60 degrees north-northeast making about 12 knots. This fits the description and position of the Narragansett at the time. At 1:20 am (German time, around 6 pm local) on Wednesday the 25th of March Schuch lined up his attack. It took a lot of maneuvering for the submarine to overtake the ship, though conditions were described as mild, with wind only 10-15 knots from the northwest and seas moderate with moon light.
At 04:01 am German time (about 10 pm ship’s time) Schuch and his men fired three torpedoes from Tubes 1, 3, and 4. None of them hit the Narragansett. Seven minutes later, at 4:08 am German time Schuch let loose two more torpedoes from Tubes 5 and 6 – again they missed. Schuch decided that his attack position was unfavorable and decided that a large tanker was too good to let pass up,
despite the fact that he had expended seven hours and five torpedoes on his prey with nil result.
At 6:03 am (about 11:00 pm local time) U-105 resumed its attack on the tanker, with no indication that the submarine or its torpedoes had been detected by the gunners or the men on board the Narragansett. Six minutes later, at 6:09 am Schuch fired another torpedo again from Tube 1 (his men must have been busy in the intervening hours re-loading the tube). This time the projectile struck the tanker in the stern, in the way of the machinery spaces. However Schuch observed that the ship would still not sink.
Nine minutes later, at 6:18 am Schuch fired his seventh torpedo at the quarry – what is known as a coup de grace. At this point he records the ship’s SSS message, the name of the tanker and that it is laden. He notes that on the afterdeck there are deck guns and also machine gun fire coming from the ship. Since he does not note any lifeboats leaving the tanker presumably they Allied merchant sailors and gunners decided to stick it out on their ship and fight it out or flee. There is a vague reference to a course of 185, perhaps indicating that the ship turned to the south and made for Bermuda (this contradicts later sightings of the ship heading north-northwest for Bermuda). 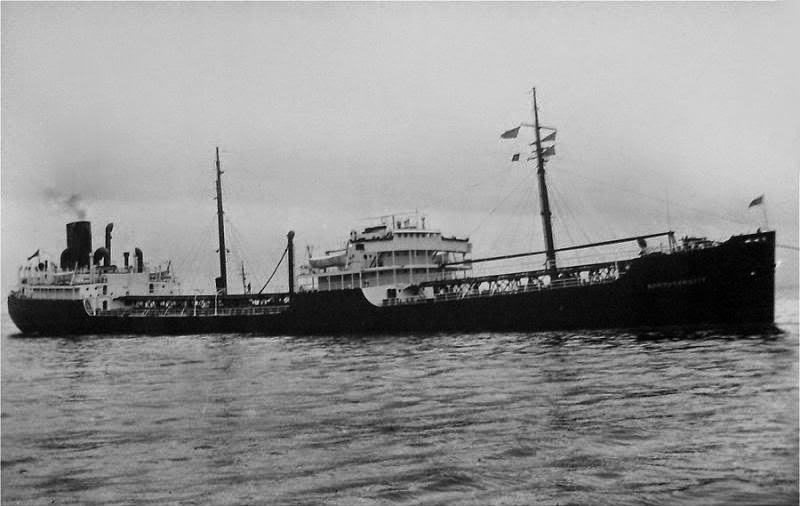 The tanker Narragansett as Heinrich Schuch and his officers would have seen her, however Allied aircraft which spotted her saw only her upturned bottom before she sank.
Photo Source: Auke Visser, http://www.aukevisser.nl/uk/id341.htm 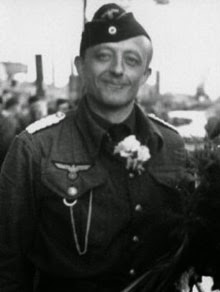 Fregattenkapitän Heinrich Schuch who sank the Narragansett. Unlike his 49 victims, he was to live until 1968 and the age of 61.
Photo Source: Uboat.net, http://www.uboat.net/men/commanders/1139.html
At 12:45 Greenwich Mean Time (roughly 6 am local time) on the Wednesday 25th of March a PanAir airplane flying for a Brazilian airline of that name reported that it observed a tanker on fire and making eight knots on a course of 320 degrees north northwest as though it were heading for New York. The position given was 3.5 miles northwest of the attack coordinates given in the Narragansett’s radio message.
This enigmatic report of a ghost ship burning but still making for land was underscored by the report of a US Navy pilot contacted at his home in Bermuda after flying a patrol. It also indicates that it was a commercial aircraft that got word out to the outside world that the Narragansett had been attacked, and not the ship’s own transmissions, made in the midst of a sustained torpedo attack.
In the Action Diary for Naval Operating Base Bermuda and Survivors Statements of the ship’s loss is a cryptic insert reading “VP [indicating squadron of an airplane] took off at dawn [from Bermuda] March 25th. to search vicinity SSS from NARRAGANSETT. Found ship 34-30N, 67.36W., bottom up at 1200Z. Ship sank at 1350Z. VP continued search during day with no sign of survivors. NOB Bermuda C 252351.” This is a further 16 miles south of where the SSS was given hours earlier, indicating either a course change or that the hull of the ship drifted in the currents.
That night the War Diary of NOB Bermuda records that “Lieutenant W. A. Thorne was contacted on the private wire concerning the operation of his plane in attempting to locate the survivors of the Tanker NARRAGANSETT, which the pilot reached after the ship capsized, but some time before it sank. There was no sign whatsoever of survivors. The weather was fair and cool.”
We may never know what happened to the 49 men of the Narragansett – whether they were alerted by the first five torpedoes and abandoned ship prematurely and were thus nowhere near the site of the wreck, or stayed aboard to run and fight it out and all burned and perished when the ship caught fire, or tried to launch the boats while the Narragansett was underway and were all lost – their story will never be completely told, only partially through the eyes of their adversary.
SOURCES:
Fold3.com – for the war diaries and deck logs and the NOB Bermuda War Diary
Holm Lawson, Sir, warsailors.com, for convoy information,
http://www.warsailors.com/convoys/hx118.html
Jordan, Roger, The World’s Merchants Fleets 1939, Naval Institute Press, Annapolis, MD, 1999
Mason, Jerry, www.uboatarchive.net and http://uboatarchive.net for the KTB of U-105
Mozolak, John, “New York Ships to Foreign Port, 1939 – 1945,” http://janda.org/ships/
“Survivors Statements” from NARA, in Washington DC, as found by Michael Constandy, www.westmorelandresearch.org. Formal citation: Survivor’s Statements (1941-1942) Series : Papers of Vice Admiral Homer N. Wallin, compiled 1941 – 1974.  Record Group 38: Records of the Office of the Chief of Naval Operations, 1875 – 2006  Entry P-13.  National Archives at College Park – Textual Reference (Military) 8601 Adelphi Road, College Park, MD 20740
Uboat.net for much of the information, including photos of U-boat Commander and its victim, http://www.uboat.net/men
Visser, Auke, “Auke Visser’s Esso UK Tanker’s Site,” for photos and details of her building, http://www.aukevisser.nl/uk/id341.htm
Wrecksite.eu for specifications and history, http://www.wrecksite.eu
Wynn, Kenneth, U-boat Operations of the Second World War, Volume 1 and Volume 2, 1997

3 comments on “M/T Narragansett sunk by U-105/Schuch North of Bermuda March 1942 – all 49 men aboard perished, ship sighted by planes afire and hull-up”