The Empire Prairie was a British cargo ship built in 1941 and delivered in late 1941 or January 1942. The ship was lost off Bermuda on what was essentially her first laden voyage, taking all 49 hands with it. The attacker was U-654 under Ludwig Forster. The ship was 7,010 gross registered tons, 449 feet long, 56.4 feet wide, and 34.3 feet deep. Her single Rowan David & Co. triple-expansion engine generated 519 net horsepower and propelled the ship at 11 knots. Built for the British Ministry of War Transport (MoWT) by Lithgows Limited of Glasgow Scotland, Empire Prairie was the yard’s 964thvessel.

At the time of her loss in April 1942 the ship was owned by Kaye, Son and Company Limited of London and registered to Greenock, Scotland on the banks of the River Clyde. Her master was Captain Richard Townsend Payne, aged 37, who was responsible for 48 other souls, five of them serving with the Royal Navy to man the guns. A number of the firemen and trimmers from the engine department were British subjects with roots in Pakistan and Bangladesh, what was then India.

On her final voyage the Empire Prairie was bound from Halifax Canada to Alexandria Egypt via Cape Town, South Africa. Her cargo was 9,022 tons of general equipment and military stores for the Allied campaign in North Africa. Since she sailed from the UK in ballast in January in Convoy ON 54 and from Halifax on April 7th, this was her first cargo-carrying voyage of any length. By the 10th of April the ship was 375 northeast of Bermuda, roughly 440 south-southeast of Halifax, and roughly 500 miles southeast of Cape Cod, Massachusetts.

At 8:30 pm German time (about 2:30 pm local time) on Thursday the 9th of April U-654 under Oberleutnant zur See Ludwig Forster, aged 26, first spotted the Empire Prairie plodding along on  a course of 190 degrees, just west of south. Forster’s crew of roughly 50 had been at sea for nearly three weeks since leaving Brest France on the 21st of March, had not sunk any vessels on this patrol. Forster had however sunk a French corvette protecting a convoy exactly two months previously. 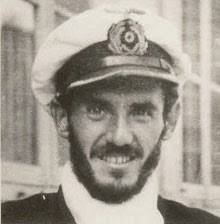 During the day Captain Payne was maintaining a defensive zig zag course, however as evening fell this measure was abandoned and the ship steamed straight. It was during the night that Forster opted to drive home his attack. In his war diary or KTB (Krieg’s Tag Buch / war day book) he writes that by midnight on Friday the 10th of April he “slowly crept closer.” By 1:00 am the conditions were “dark, very favorable attack weather,” and he observed that the Empire Prairie “has 3 masts, a crow’s nest forward, astern a crane on the deck, smokestack and bridge between the first and second mast.” By 2:20 am the sub is motoring alongside the ship, easily matching the merchant vessel’s 10 knots, since U-boats were capable of twice that speed on the surface. Then he “turned for a double shot.”

Forster’s first shot ran ahead of the ship, “running track is easily seen due to marine phospherence.” What happended next is best described by Forster himself, since he is one of the few survivors to have witnessed it first-hand:

“2nd shot hit center, very heavy detonation, apparently a secondary explosion, steamer breaks apart in the center and goes to the deep in a few minutes.  A short time later 2 detonations, probably boiler explosions.  Everywhere lights flash, the stern stands for a short time vertically and then sinks quickly away.”

Considering that we know none of the 49 men from the Empire Prairie survived their ordeal, the next description can only be seen as tragic:

“Closed the lifeboats, everywhere on the wreckage people sit and call for help. Asked for the name of the steamer: Sounds like “EMPIRE LAIRING”. Not found, presumably “EMPIRE LIGHTENING ” (7000 tons).”

Under Admiral Doenitz’s Laconia Order earlier in the war, Forster of course could not rescue any of the survivors, even if he had room and provisions for them at the outset of a long patrol. He had to leave them to their own means, which were few, as the ship went down so quickly. Weather conditions at the time were described as fairly mild – wind about 10 to 15 knots, seas 1-2 feet, with medium to good visibility at night.

When one reads of the many extraordinary chance rescues of thousands of other mariners in open boats – spotted by other merchant ships, by naval ships, by aircraft, and rescued – one realizes that for the men of the Empire Prairie there were no such good breaks – they were cast into an unforgiving sea and they drowned there, stark in its simplicity.

On Saturday 16th of May 1942 the British Admiralty coverage for the South Atlantic posted the Empire Prairie, due in Cape Town 12 May, as not arrived and “overdue.” In time of war the subtext of this message is that the vessel is presumed lost. All that remained was the hope that the men might somehow drift out of the wide expanse of the Atlantic. These forty-nine men did not.

Captain Payne might have been forgiven for thinking he and some of the men could survive their predicament: after being sunk by a German submarine from the Marina under his command, he and 16 crew survived the cold North Atlantic waters near Rockall before being rescued by the merchant ship Carlingford. For his exemplary leadership Captain Payne was awarded the George Medal as well as the Lloyds War Medal for bravery in the course of his duties at sea.

One of the indirect victims of the Empire Prairie were parents George and Mary Helen Beaton of Penarth, Glamorgan, a port town southwest of Cardiff, Wales. They lost a 31-year-old son Geoffrey Charles to accidental drowning on the 26th of March 1941, before the Empire Prairie was even launched. An their other son, Joseph Thomas Beaton, aged 36, was Second Engineer Officer on the Empire Prairie, lost at sea and now memorialized at the Tower Hill Memorial in downtown London.