Skip to content
MT EMPIRE STEEL, Attack & Survivor’s Narrative
by Eric T. Wiberg, www.uboatsbermuda.com, April, 2014
Empire Steel was a British motor tanker of 8,138 tons. She was built by Cammell Laird & Company of Birkenhead, England in 1941 as yard # 1053. The ship’s dimensions were 479 feet length, 59 feet beam, and 33.8 feet deep. A single eight-cycle oil engine turned one propeller at 502 net horsepower to achieve a speed of 12 knots. Though built for and owned by the Ministry of War Transport (MoWT), Empire Steel was operated by the Bank Line Limited. At the time of her final voyage she was  under the control of to the British Ministry of Shipping. She received her sailing orders from the British Consul at Baton Rouge, Louisiana on the 13th of March, 1942.
During her short career the Empire Steel was a busy ship. Her maiden voyage in ballast began on the 21st of March 1942, and she sailed from Liverpool to Aruba via the River Mersey. Then it was Halifax to the UK in Convoy HX 124, over to New York and from Halifax to Belfast Lough in HX 138 in July of 1941. On the 12th of July the Empire Steel was in a collision with the steam ship Historian. She sailed again for New York in September 1941, then to the UK from Halifax in Convoy HX 149. From Milford Haven it was back to New York in October, and then from Liverpool to Trinidad independently in November and December. From there back to Halifax then Liverpool in January 1942. 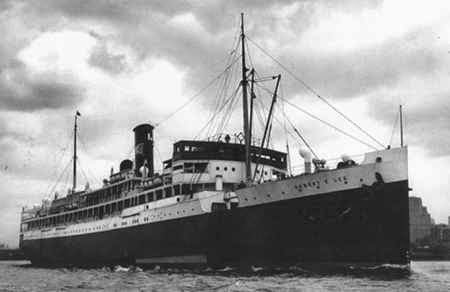 SS Robert E. Lee, Source: http://www.uboat.net/allies/merchants/ships/1981.html
As one would expect, the Robert E. Lee had a story of its own. She was built in 1924 by the Newport News Shipbuilding & Dry Dock Company as yard # 277 in Virginia and owned by the Eastern Steamship Company f Boston. A passenger steamer, she was 5,184 gross registered tons, 377.5 feet long, 54.5 feet wide and 30 feet deep. Two steam turbines drove a single shaft to achieve 16 knots. She was lightly armed with a single 3-inch gun.
Her usual wartime route was serving the growing US military bases in the Caribbean from New Orleans, where she ultimately met her fate. So what was she doing around Bermuda in March of 1942? Author Jonathan Land Evans, Esq. tells the story best, based on extensive archival research in Bermuda:
By February/March 1942 “…there was mounting concern in Bermuda, not only at the sudden destruction of three Canadian National Line vessels that had been serving the island [Lady Hawkins 19 Jan. 1942 and Lady Nelson 10 March, 1942 – but the Lady Drake not until later, on 5 May, 1942], and at the likely discontinuance of the two Alcoa Line ships that were now Bermuda’s only regular link to the USA [Alcoa Guide was sunk off Bermuda 17 April 1942 and Alcoa Shipper on 30 May, 1942, though it is not known if these were the two ships Land refers to], but also at rumours that ships were reluctant to sail for Bermuda from New York because of delays in their being unloaded at Bermuda because of labor shortages – rumours that led to Roddy Williams, Chairman of the Labor Board, also being sent to New York to help dispel those concerns.”
Land continues: “For lack of anything better, the Bermudian emissaries succeeded in securing the services of a very decrepit old ship, the SS Robert E. Lee, and then of a slightly more seaworthy vessel, to keep vital supply-lines going. ….In early 1942 the British authorities in New York seem to have commissioned an aptly-named American schooner, the Deliverance, to help the supply situation by bringing goods and other essential items to Bermuda from the USA.”
This effort was only partially successful, as Land later notes that the lack of a reliable supply link to the mainland (US and Canada) accelerated the island’s conversion from cycle and horse to motorized vehicles: “Cyclists were forced to make do with whatever they could get their hands on to prolong the life of their cycles (for example using rope instead of tyres), and many horses had to be killed because of the lack of imported feed for them.”
If the SS Robert E. Lee was chartered in by the Bermudian government in February 1942 and was said to have been in a “decrepit” state at 16 years since she was built, and was being towed from Bermuda to the mainland on March 23rd, it can be assumed that the ship broke down either in Bermuda or in the service of that island in March 1942, shortly into its charter. By May of 1942 she was under charter to Alcoa Steamship Company to serve new US bases being built in Trinidad and Puerto Rico. Staff Sergeant Richard Barry was a passenger aboard the ship from the US (presumably New Orleans) to Puerto Rico, St. Lucia, Antigua and Port of Spain, Trinidad that month.
A boarding pass from the Robert E. Lee in May 1942 warning of blackout and banning cigarette smoking on deck, both precautions against the ship being seen by nearby U-Boats.
Source: http://fcveteranstories.us/images/barry/boardingpass_back.jpeg
The Robert E. Lee was on a voyage back from Trinidad to New Orleans in July 1942 when it was caught by U-166 off New Orleans and sunk after a surface battle which also saw the U-boat, under Hans-Günther Kuhlmanndestroyed. The Robert E. Lee left Port of Spain on the 21st of July and sailed for Tampa, then New Orleans. On the 30th it was torpedoed by U-166, which was counter-attacked by the US submarine-chaser USS PC-566, which sank the U-boat with depth-charges.
The Robert E. Lee was carrying survivors of several Allied ships, including 28 from the Andrea Brøvig and 44 from the Stanvac Palembang, one of whom perished. Overall 379 survivors were picked up by the USS PC-566, USS SC-519 and an American tug named Underwriter and landed ashore. The only German submarine known to have been sunk in the Gulf of Mexico, U-166 was discovered, along with the wreck of the SS Robert E. Lee, in 2002 by a team of engineers charting the route of a BP pipeline.

Captain Gray was awarded the Order of the British Empire, or OBE, in London in 1943 for his fortitude under duress and for bringing survivors out of the horrific inferno that the Empire Steel became that evening in March.