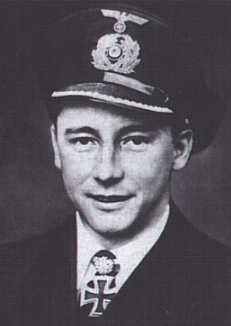 Adalbert Schnee of U-201 – since “Schnee” means snow, the symbol for the U-boat was a snowman with a Knights Cross around its neck. He lived to teach sailing in Elba, in the Med., after the war.

Adalbert ‘Adi’ Schnee led the next patrol into the region on 21 April 1942, and it was a short but effective one, resulting in the sinking of the British-flagged Derryheen of 7,217 tons as well as the US-flagged San Jacinto of 6,069 tons following day. The San Jacinto was remarkable in that it was a steam passenger ship carrying 183 persons (104 of them passengers), of whom fourteen were killed. The 169 survivors included 32 women and children huddled together on rafts and boats and sent an SOS via portable radio the following day. They were picked up on 23 April and landed on the next day in Norfolk, Virginia.

The Derryheen sinking was remarkable inasmuch as the gun crew of the merchant ship managed to fire back at the submarine, though it might be a stretch to call it a duel. Both sinkings occurred well to the northeast of Abaco’s Elbow Cay Light, about two thirds of the way to Bermuda.

U-201, a Type IXC boat sailing in the First Flotilla out of Brest France, was on its sixth of nine war patrols. On the 23rd of April Schnee left the region to return to the Hatteras patrol area, where he had previously sunk the Bris and damaged the Argentinian Victoria for a total of three ships sunk for 5,313 and one of 7,417 damaged in this patrol. However the Victoria was towed into port by destroyers which rescued the crew. His short foray into the area looks just like the letter V – simple, symmetrical, and in this case deadly. The patrol began in Brest on the 24th of March 1942 and ended there on the 21st of May.

Schnee was a member of Crew 34 – 28 years of age at the time, he survived the war, dying in Hamburg in 1982 at age 68. At the time of the attack he was Kapitänleutnant (recently promoted) and at the end of 1944 he achieved Korvettenkapitän rank. Following this patrol he was awarded Knights Cross with Oak Leaves, a rare distinction. His total tally was twenty-one ships for 90,189 GRT, two auxiliary war ships for 5,700 tons and three ships damaged for nearly 29,000 tons. He had begun his U-boat career in May 1937 and served under “Silent Otto” Kretschmer on (one of the war’s greatest aces) aboard U-23.

Moving ashore after his seventh patrol he led operations against convoys. The symbol for his boat was a snow man with a Knights Cross around its neck which was painted on the conning tower – this is because “Schnee” means “snow” in German. Following retirement from a commercial job in Germany, he directed a sailing school on the Mediterranean island of Elba, where Napoleon had been incarcerated in a previous war.