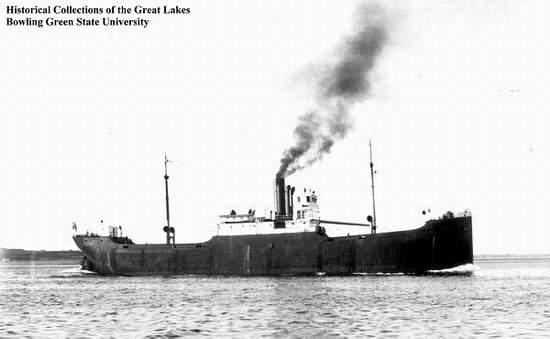 The American steam ship Norlandia of 2,689 ton was built by the Manitowak Shipbuilding Company of Manitowoc, Wisconsin. Her original name was Lake Galeta, and she was owned and operated by the United States Shipping Board in Washington until 1926. Her next owners were the Merchant and Miners Transportation Company (M&MTC) of Baltimore, Maryland, who re-named her the Wyoming until 1942. Then for a few months the Norasco Steamship Company owned the ship and re-named it Norlandia. In 1942 Merchants and Miners re-purchased her and retained the new name. Her operators on the final voyage were the North Atlantic and Gulf Steamship Company.

On her final voyage the Norlandia had loaded cargo in Tampa Florida with orders to discharge in Antigua, British West Indies. The instructions to Captain Herbert Elvin Callis were to be issued routing instructions in the discharge port. However Callis protested that five American naval officers in Antigua, led by an officer named Cromwell, refused to issue routing instructions and so the ship proceeded to San Juan, Puerto Rico for orders.

In San Juan he was told to proceed to Nuevitas, Cuba to load a cargo by using the offshore route north of Hispaniola. The captain protested that the inshore route would have enabled the ship to be safer from submarines as well as give them a westerly boost using a coastal countercurrent of several knots. However he obeyed the orders and sailed into the sites of U-575 under Gunther Heydemann on the night of the July 3rd, 1942.

Captain Callis had a total of 30 men on board including himself. The ship was unarmed and thus had no Naval Armed Guard. All of her crew with the exception of one Norwegian were Americans. The ship was travelling without cargo and with tanks filled with salt water ballast. The night of the 3rd was clear but the seas were rough as the ship approached position 19.33N by 68.39W, north of Samana, Dominican Republic, and southeast of the Turks and Caicos Islands. Norlandia was steaming at 304 degrees true northwest, heading for the Old Bahama Channel. She was making 11 knots and not zig zagging. There were four men looking out – one in the bows and three others at their usual watch stations on the bridge.

At 9:38 pm according to Heydemann (Captain Callis said 9:40, so the torpedo may have been fired two minute before), a torpedo slammed into the starboard side of the Norlandia between the engine room and the number three cargo hold. The ship’s machinery was knocked out immediately, followed by extensive flooding. There was a “tremendous flash” and a nauseous and sickening gas permeated the alleyways and cargo holds of the ships, killing some outright and disabling others with paralysis and vomiting.

Norlandia had two lifeboats and four rafts, and in five minutes some of the men managed to launch both boats and two rafts, the other two having been destroyed in the explosion. Twenty one managed to consolidate into the two boats. No radio message was sent and the ship sank in fifteen minutes, at 9:55 pm. Captain Callis said that two of the killed were engine staff from the three on duty below and that the balance of seven men must have been killed in the effort to escape the ship or drowned in the water.

As the men searched the area for survivors the submarine surfaced and approached them. Third Assistant Engineer D. A. Kinsaul could not help admiring how maneuverable U-575 was, as it “came very close to the lifeboat with the greatest of easing, proving excellent maneuverability…. Indicating that the crew was well experienced.” Heydemann asked the mate for the name of the ship and had to have it spelled out. He was described as aged 40 to 50 , and was wearing khaki shorts, short boots, a uniform coat and officer’s hat. When he asked “Anything I can do to help you” and was told no, he nevertheless handed the men a bottle of German brandy.

The crew on the sub used flashlights with impunity, evidence that they were not afraid of an immediate allied counter-attack. Then they motored off to the northeast on the surface. The boats were left alone on the empty sea by 10:25 pm, roughly 45 minutes after the attack. The two boats began their voyages south using oars and sails. It took the first boat 18 hours to make it to shore (arriving 4 pm on the 4th of July) and the second one 30 hours (arriving 2 pm the following day). They both arrived in Samana, on the northeast coast of the Dominican Republic.

Seven of the men were reported by Captain Callis to have been injured, and they received treatment for their ailments. From Samana the 21 men were transported to Cuidad Trujillo where they were interviewed by naval officers. Ten days after the attack they were flown from Cuidad Trujillo to Miami, Florida, from whence they were further repatriated and no doubt rejoined the war.