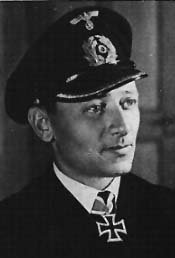 U-155 under the command of Adolf Cornelius Piening both entered and exited the area midway Bermuda-Anegada, spending a total of nineteen days in the region. On the way in U-155, a Type IXC boat, entered the Windward Passage on the 5th of March, having entered the area on the 27th of February. Piening opted to shave close to the northwest coast of Providenciales and the east coasts of both Little Inagua and Great Inagua with no ships sunk.

Piening exited the area south of Cuba on the 6th of March, rounded that island westbound, and re-entered after sinking the Lysefjord off the Yucatan Channel on the 2nd of April. The following day U-155 sank the Gulfstate east of Key West Florida, just inside the southwestern boundary of the area.
From there Piening opted against the Old Bahama Channel in favor or riding the Gulf Stream up the Straits of Florida during the 4th and 5th. On that day he back-tracked briefly towards Grand Bahama, cleared close to Walker’s Cay, then shaved close to the northeast coasts of Abaco, most likely taking a bearing off the Elbow Cay lighthouse on the 7th of April before taking an easterly course.

Unlike Ulrich Heyse in U-128 ten months before, Piening ignored the entrance to the Northeast Providence Channel and instead turned eastwards and then southeast On the13th of April U-155 exited the area south of Bermuda home bound to Lorient. She returned on the 30th of April, having set out on the 8th of February, 1943.

In eighty-two days of patrolling the boat had accounted for a respectable (for the time) 7,973 tons. U-155 also fended off an attack during its return voyage when on the 27th of April, inbound to France it was attacked by an unknown Allied aircraft (Blair Vol. 2, p.219).  It was the boats’ fifth of ten patrols but its only into the region. Accountable for 25 ships for a very impressive total of 126,664 GRT, as well as a warship (HMS Avenger) of 13,785 tons sunk and an auxiliary warship of 6,736 tons damaged, Piening had already earned the Knights Cross. He was 32 at the time of this patrol and lived until 1984 and the age of 73.

During the closing weeks of World War II whilst in command of U-255, he mined the approaches to Saint Nazaire against an Allied attack and spent until 1947 in captivity. He rejoined the Bundesmarine in 1956 for thirteen years and achieved the rank of Kapitän zur See. A special route to avoid Allied aircraft in the Bay of Biscay became known as the Piening route since he is acknowledged to have perfected it. He achieved 459 days at sea on eight patrols over his career after initially serving on the cruiser Deutschland and U-48.