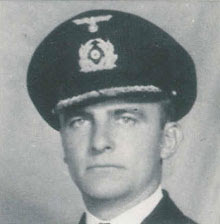 FregattenkapitänWalther Kölle of U-154, which sank the Canadian SS Vineland off Provo.

The next patrol to the region was led by Walther Kölle, whose submarine, the U-154 was to return to the area four times in the course of the war – a record only tied by U-129. Unlike Achilles’’ and Mohr’s, Kölle’s patrol was squarely in the patrol area. His voyage in, commencing the 3rd of April 1942 looks like a standard “slash” sign – / – heading from north of Anegada into the Mona Passage, during which he sank two Allied ships, the Puerto Rican tanker Comol Rico and the US-flagged Catahoula on the 4th and 5th respectively.

On the 6th of April Kölle entered the Mona Passage and left the region for nine days, returning through the narrow passage east of Puerto Rico (between there and the Virgin Islands) for a cruise north of the Turks & Caicos Islands and east of Acklins and Crooked Island.

Kölle’s patrol back to Lorient through the eastern Bahamas looks like the number “5” tilted to the left – he proceeded to a point roughly 300 miles north of the Mona Passage, doubled back to off the Silver and Mouchior Banks, steamed along westwards to the north of the Turks & Caicos, and on the 20th sank the Canadian dry bulk ship Vineland. This ship was the only Canadian sunk in the region during the conflict. On the 21st Kölle was just east of Crooked and Acklins Islands when he turned northeast and made a bee-line back to France, passing just south of Bermuda and exiting the area on 24th of April.

On this patrol U-154 sank five ships (including the Delvalle and Empire Amethyst in the Caribbean) worth 28,715 tons – an impressive bag and in some ways close to his last. Aged 34 at the time (he would live to 1992 and the age of 84), Kölle’s career total included only two other ships (Tillie Lykes and Lalita) bringing his total to seven ships for 31,352. It is safe to say he “made his career” in a single patrol through the Bahamas. He achieved Fregattenkapitän in March 1945 (right before the fall of the Reich) and was not decorated. His three patrols for 164 days were all on U-154. This patrol began in Lorient on the 11th of March 1942 and ended there on the 9th of May.

Kölle had earlier survived the scuttling of the Graf Spee off Uruguay and rose to senior naval officer of the Flushing base before joining U-boats in November 1940. His patrols to the region lasted 60 and 80 days respectively – the following patrol being to Mexico and the Caribbean. He surrendered command of U-154 to Heinrich Shuch after his third patrol and moved ashore to staff positions.
SOURCES: Gudmundur Helgason, Rainer Kolbicz, www.uboat.net, 2011, Kenneth Wynn, U-boat Operations of the Second World War, Volume 1 and Volume 2, 1997