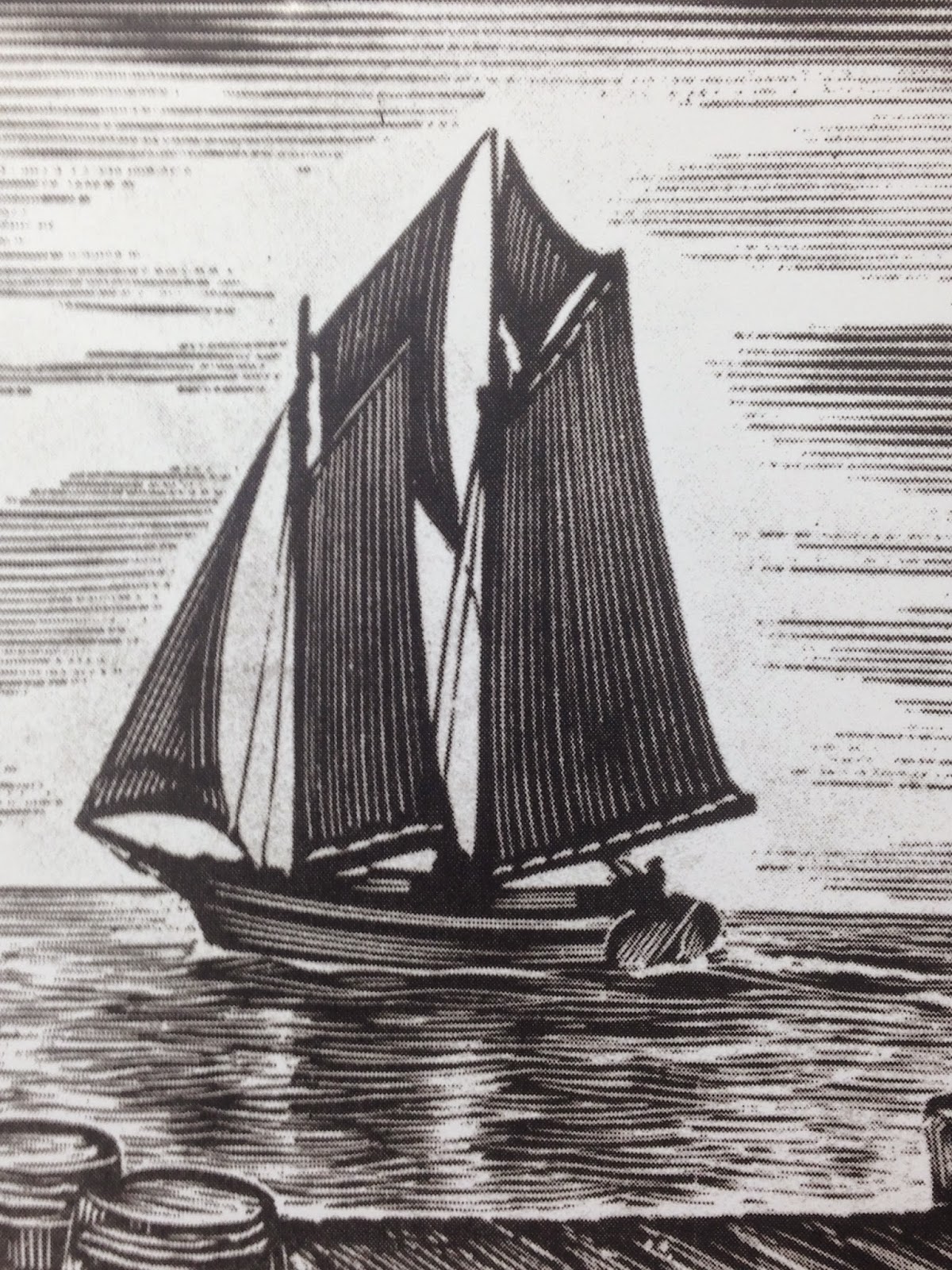 This is a woodcut image of the S/V Dart, the first recognized inter-island mailboat in the Bahamas. The photo and captions hang in the office of Mr. Elvin Taylor at the headquarters of The Mail Boat Company in Nassau. She was originally a 35-foot fast pilot boat taking pilots to ships over the Nassau Harbour Bar, however she was lengthened amidships twice in her career. Able to make the trip to Harbour island in the fast time of 8 hours she is said to have won in a number of regattas in the Bahamas. She was apparently lost in one of the hurricanes to hit the islands (date unknown).

Here is the full text of a photo caption from Elvin Taylor of The Mail Boat Company, April 2015:

“The Dart” was the first scheduled mail boat from Nassau to Harbour Island. Originally a pilot boat of about 35 feet in length, she should sail from Harbour Island to Nassau in the record time of eight hours. She lived up to her name and won many regattas in Nassau, until she disappeared during a Bahama hurricane. Twice she was lengthened by adding to her amidships.

In those early days, when “The Dart” entered the harboiur, “Old Barney”, a coloured deck hand, would fire a small cannon located on the forward deck. She would then tie up at Harris’ Wharf, the First Harbour Island dock, which was located at the foot of today’s Pine Street.”

The principal service of the mail boat as outlined in the despatch was the transport of the mail packets coming from England and America through the Bahama Islands using Crooked Island as the chief mailing station.

The Bahama Islands Legislature objected to the expense of the mail boat system and thought that the people should pay for the service. However, it did not hesitate to extend the mail services to Port Royal, Jamaica, so that despatches could be had promptly.

“The Dart”, 1870 which is believed to be the first regularly scheduled mail boat from Nassau to Harbour Island. “The Dart” was also known for her racing ability. She was lost during a Bahamas hurricane.”
From Anne & Jim Lawlor’s “The Harbour Island Story,” MacMillan Caribbean, Oxford, 2008:
“Captain, William G. Harris, a veteran sailors, had captained both previous harbor island mailboats, the Dart and the Endion.” (p. 151)

“Although briefly replaced in 1892 by the Kate Sturrup, the schooner, Dart, had the contract to carry the mail, freight and passengers from 1870 until 1922, when the MV Endion replaced her.” (p.248).

In her article “The role of the coloured middle class in Nassau, Bahamas, 1890-1942,” Dr. D. Gail Saunders, then of the Department of Archives in Nassau, wrote:
“….certain mail boats, like The Dart which plied between Nassau and Harbour Island, had sections for whites only. No coloureds were allowed to enter The Dart’s cabin.”
Citations to “The Land of the Pink Pearl,” by L. D. Powles, London, 1888, pp. 120-121, and also “History of and Guide to the Bahamas,” James H. Stark, Boston, 1891, p. 139