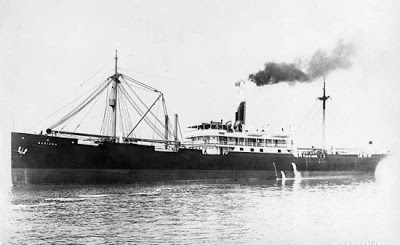 The American steamship Mariana was built in 1915 by the Newport News Shipbuilding and Drydock Company of Virginia. Early in her career she was requisitioned by the US Government for work in World War I, and ultimately sold to the New York & Porto Rico Steamship Company (Agwilines) of New York – the same firm which owned the S.S. Seminole. Here dimensions were: 102.1 meters by 14.3 meters by 6.9 meters deep. Unlike others in the fleet she was strictly a cargo – and not a passenger – steamer. Her gross tonnage was 3,110 tons.

According to Uboat.net, “In July 1918 requisitioned by the US Navy, commissioned as transport USS Mariana (ID # 3944) and assigned to the Naval Overseas Transportation Service. After two voyages to France the ship was decommissioned and returned to the owner by the US Shipping Board (USSB) in April 1919.” Though some sources (Uboat.net) list the ship as unarmed, the “Report on U.S. Merchant Vessel War Action Casualty” filed with the Commander, U.S. Coast Guard in Washington states that she was in fact armed with a 4-inch “50”, a 3-inch “50” and eight 20-milimeter machine guns.

The Mariana was under the command of Captain Ivan Elroy Hurlstone, with a crew of thirty four other souls carrying roughly 4,000 tons of sugar from Guanica, Puerto Rico to Boston. She left Guanica on the 3rd of March loaded to 20 feet of draft. Two days later, on the night of 5th March 1942 she was just north of the Turks and Caicos Islands and heading north to her destination when she sailed into the crosshairs of Ernst Bauer’s periscope on U-126. Bauer was having an exceptionally busy patrol, having attacked and sunk the Gunny and was on his way to sink the Barbara, Cardonia, Hanseat, Texan, and Olga and damage the Esso Bolivar and Colabee for nearly 50,000 tons in aggregate.

At 22:44 hours German time the U-126 struck the Mariana with one torpedo which penetrated the hull after of the mast. It only took five minutes for the ship to sink. All twenty eight US crewmen and their eight officers perished, despite the ships’ proximity to land. This is somewhat surprising, since the US Navy performed a weather analysis of the route the ship took, and concluded that no unusually severe weather occurred on the whole passage.

The navy and commercial interests were trying to determine why the ship was overdue in Boston and whether lost from natural or war causes. A post-war study of the attack report by U-126 however confirms that the ship was sunk, but at the time the Allies would not have known that. None of the four life boats and two life rafts were ever found (the author has run ads in the Turks & Caicos newspapers seeking information on wartime events to no result). The Mariana had an inspection certificate issued on the tenth of February, 1942 in New York – just 3 weeks before her demise.

If the weather was comparatively clear, the ship took five minutes to sink, and land was only roughly fifty miles away (or a 10 hours’ sail in the trade wind at a speed of 5 knots), then why were all the crew killed? The hour was not even very late – suppertime and after dusk, and the water was quite warm compared to most other conditions faced by survivors. The cargo was neither flammable nor explosive nor as heavy and dense as iron ore. So the fate of the crew of the Mariana – of George Harrison, Fireman/Wiper, Stephen Karayan, Messman, Vasile Manea, Bosun, Adolfe Ayra, Oiler, henry C. Ahlrichs, Chief Mate and Jacinto Medina, Coal Passer, will remain a mystery but no less tragic for it (Uboat.net, “Report on US Merchant Vessel War Action Casualty”, USCG dated 26 October, 1944 – NARA 1, Washington, DC).