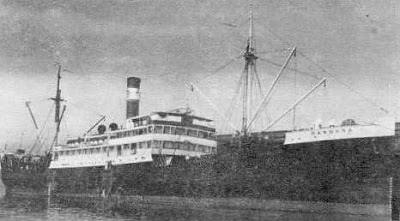 The loss of the passenger and cargo steam ship Barbara is remarkable for two things: that it failed in its mission to bring a valuable cargo and personnel destined to help construct a US Navy base in Puerto Rico, and the high loss of life amongst its passengers and crew – at least 26 out of 85, or nearly one third, perished. It is also interesting to note that as they drifted away from their own burning and sinking ship, survivors of the Barbara witnessed an attack on Cardonia nearby by the same submarine commander, Ernst Bauer in U-126.

The Barbara was built in 1913 by William Cramp & Sons, Ship & Engine Building Company of Philadelphia, Pennsylvania. Up until 1930 she sailed on the South American passenger run for the Grace Line, Inc. (W. R. Grace & Co.) of New York as the Santa Cruz. In 1930 she was renamed Barbara and ownership transferred to the A. H. Bull and Company Incorporated of New York, NY.

Barbara had a triple-expansion steam engine which was fueled not by coal but by petroleum products, and here 2,650 horsepower could propel the ship at 11 knots. Her gross tonnage was 4,637 gross. Here dimensions were 384 feet overall length, 50.2 feet wide, and 26.6 feet deep draft. She was registered to the port of New York. Her cargo on the final voyage from Baltimore Maryland was 2,500 tons of general cargo consigned to the US Navy along with her 28 defense workers.
Captain Walter Gwyn Hudgins (born December 6, 1906 and 35 years of age at the time) was ordered by the navy to keep close to the coast for the entire passage, so he hugged the US eastern seaboard southbound between Florida and the Bahamas, then proceeded down the Old Bahama Channel between Cuba and the Bahamas.

The voyage began in Baltimore on the 28th of February 1942 after the Radio Operator, J. G. Lopez tested the radio equipment one last time. On the 6th of March, whilst crossing the entrance to the Windward Passage, the ship rode through a storm, and though conditions were only Beaufort Force 2, calm and nearly windlass, on the following day, the 7th of March, there was a residual chill to the air and the seas were still lumpy. The Barbara was about to encounter Kapitänleutnant Ernst Bauer on the U-126 which was just in the midst of a two-week, nine-ship sinking spree. It would not end well for the civilian vessel.

Because of the requirements of the ship’s passengers there was a large crew of 58 including Mary Gray, a Latvian woman nicknamed “Grandma” who was a naturalized American and served as a waitress to the 28 or so passengers, who were going to work on the US Navy base.

The crew, under Captain Hudgins and First Officer Joseph Smith, were a mixed bag which included a naturalized Austrian Quartermaster, other Latvians, Puerto /Ricans, Filipino, Spanish, Venezuelan, Portuguese, and Lithuanian citizens. Amongst the 28 passengers were Ines Stolle, Hipolito Gonzalez, and Doris Anthony, all killed. Spurgeon Marshall, Oscar Deutsch, Howard O. Pultz and Jack Kempton all survived – the master was at pains to point out that there were “no Axis”, or undesirable, persons on board.

At 02:30 ship’s time on the morning of the 7th there were two lookouts on watch, one on the forecastle and another on top of the wheelhouse, and Captain Hudgins had been manning the bridge personally since 30 minutes after midnight. The ship was approaching the landmark of Tortuga Island (Tortue, in the native French of Haiti), roughly 8 miles off the starboard bow. The ship was making 12 knots just slightly north of east. Compliant with Naval orders, she was zig sagging according to the proscribed naval tables.

At 2:32 am a terrific explosion tore into the ship, as a torpedo ripped its way from the port, or seaward side amidships out of the starboard side. In doing so the projectile ignited the fuel bunkers stowed forward of the engine room and set off a massive fire which soon enveloped the middle of the ship. For the lifeboats it was a double-whammy: those on the port side were smashed by the impact of the torpedo, even though it penetrated some 10 to 20 feet below the waterline. The boats on the starboard side were rendered inoperable by the fire and inaccessible by the tilt the ship soon developed to the starboard side. According to Crew Mess-man Charles D. Teacher, a large hole extended to above the water line, and it is estimated that 30 to 40 feet of hull plating was torn off the ship by the explosion – a fatal blow.

Captain Hudgins sounded the alarm and turned on the emergency lighting before running to the first lifeboat, which he could not reach because of the flames. The second lifeboat on the port side was just a piece of planking hanging from the davits, so the master ran forward, using the ship’s boom to assist him to get to the well deck. There he and crew released as many rafts as he could – two from the port side – once the ship stopped moving.

On board was fear and confusion, and an acrid smell, possibly of cordite or burning fuel, which caused those who encountered it to have acute difficulty breathing. Radio Operator “Jay” Lopez described a thick misty grey smoke. He and the Third Officer, David W. Booth struggled out of their cabins and onto the deck. Though “Grandma” Grey said that there was “no panic, some plenty scared, but behaved alright,” Booth said “some behaved good, others were panicky and jumped overboard without life preservers.” In his report of 6 April, Ensign A. J. Powers of the Office of Naval Intelligence in New York described a “complete lack of discipline and order on the part of the crew during emergency.”

As passengers and crew scrambled off the burning ship and swam clumsily towards life rafts, the ship continued to roll over on its starboard side and take on increasing amounts of water by the stern. When last seen after 6 am she was very low on the water and by all accounts doomed to sink. By that time the survivors in the rafts were being pushed along by the currents in the difficult to propel rafts, and had another ship to watch burn – the Cardonia, which was sunk behind the Barbara despite its captain’s efforts to make full speed for land after seeing the Barbara struck.

Once free of the ship the survivors found themselves atop four improvised vessels:

As a final tally Uboat.net states that eight passengers and 18 officers and crew were killed, making 26 out of 85 persons. The war was far from over for Captain Hudgins and probably the came could be said of his crew and the passengers as well. Hudgins’ next ship, the Elizabeth, was sunk by U-103 under Winter on the 21st of May, just over two months after he was plucked from the waters off Haiti and flown back to Miami.