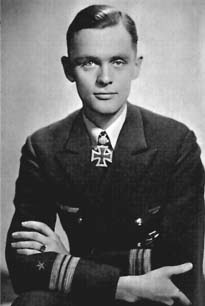 Kapitänleutnant Reinhard Hardegen of the famous U-123

On the 6th of April Reinhard Hardegen on the famous “one two three” boat, U-123 returned for one devastating week. After skirting Newfoundland and Cape Hatteras the boat entered the region off Savannah. Two days after coming south from the Carolinas to off the Georgia coast he damaged the 7,989-ton tanker Esso Baton Rouge and the 9,264-ton Oklahoma. Proceeding south along the eastern coast of Florida to a position some thirty miles off West End Grand Bahama he sank in quick succession the Esparta on the following day (9th April), then two days later the tanker Gulfamerica off Jacksonville.

Immediately following this attack the boat was pinned down by an Allied plane and ships in an attack which would have led to the destruction of the U-boat by more persistent foes in almost any other theater at the time:

“After sinking Gulfamerica the boat was located in shallow waters by an aircraft which directed a destroyer to the position. At 09.17 hours six depth-charges were dropped on U-123 moving over the bottom at a depth of twenty meters and badly damaged her. The boat played ‘dead man’ and despite air bubbles escaping from damaged valves, no more depth-charges were dropped by the destroyer which left after one hour. Most of the damages could be repaired by the crew and the boat continued the patrol.”

To these successes he added the American-flagged Leslie, and the Korlsholm, a Swedish ship which began the war detained off Morocco. Given that Hardegen dispatched the Alcoa Guide en route home and the Muskogee, Empire Steel, USS Atik, and Liebre to and off Hatteras, his total bag for one patrol was eight ships sunk for 39,917 and three damaged for 24,310 tons.