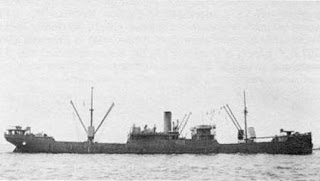 The steam ship Colabee was the last of Ernst Bauer and U-126’s long list of victims in the Windward Passage and Old Bahama Channel area. She had just loaded 38,600 bags of sugar at Port Tarafa, in the town of Nuevitas, Cuba, and was bound to Baltimore Maryland when she was struck at 9:40 local time a mere ten miles from shore. Because of her proximity to shore, and despite having been abandoned by her crew Colabee was grounded at Cayo Verde and ultimately salvaged.

The Colabee was built in 1920 and weighed 5,617 tons. At the time of the attack she was under the command of Captain Lee Merchant Morgan and her cargo of sugar weighted 5,527 tons. Her draft forward was just over 20 feet. She was operated by the American Hawaiian Line, but still owned by the Illinois-Atlantic Corporation. For several years Colabee sailed under the Colabee Steamship Company name, a convention more common in the later era of flags of convenience. Since 1938 her real owners was John C. Rogers and Company of Philadelphia, who owned four single-ship companies. The management vehicle was the American Range Lines Incorporated, base at 860 Drexel Building on Chestnut Street Philadelphia, though the ships were registered to Wilmington Delaware for tax purposes.

In 1941 the Illinois Atlantic Corporation bought the Colabee to carry newsprint from the Great Lakes to papers liked the New York Herald, and New York Times, replacing Canadian ships which had been requisitioned by the British for the war effort. Interestingly her managers were Edward P. Farley and Company Incorporated of 90 Broad Street, New York, NY, which happened to be the same address as the American-Hawaiian Lines. In fact Farley was a member of the Board of Directors of American-Hawaiian since 1926 and would become the firm’s chairman in 1944. Because American-Hawaiian did not formally purchase Colabee she did not assume one of the usual names of that line such as Californian or Canadian, which were available at the time (ss.arkansan/home/American-hawaiian-in-wwii, uboat.net, Mirimar Ship Index).

The Colabee was manned by 37 men (36 American and one naturalized Puerto Rican) and had only left Nuevitas earlier on the day it was attacked – 12th March 1942. She had left New York in ballast on the 15th of January to load sugar in various Caribbean ports. The weather was clear, with a wind from the north-northeast at about 12 knots and the seas were moderately choppy. When the torpedo struck at 9:40 pm the ship was on course 318 degrees true (northwest) steaming up the Old Bahama Channel roughly eight miles north of Cayo Verde (Green Cay) Cuba, at position 22.10N by 77.30W. Bauer’s last torpedo struck the starboard, or seaward side, roughly ten feet below the water line. Immediately the wheel was turned to port. The explosion ruptured the number two hold, damaged the hull and disabled the ship.

According to Eckman, the hole measured from eight to fourteen feet in diameter. The ship listed down by the head, with the superstructure above water. It was calculated that the submarine had fired from roughly 800 yards away on the starboard quarter. The ship had been running blacked out with a silent radio and its two lookouts were stationed not on the bow and transom, but on the bridge. The Chief Engineer ran to the engine room and tried to put Colabee in reverse but was unable to. He was just able to shut off the engines, however in doing so he was badly scalded by escaping steam.

Then pandemonium seems to have reigned, with the First Mate saying that “on orders from the owners, the master was forced to lean backwards in the treatment of the crew.” He further stated that “when the torpedo struck the crew became panicky, leadership was lacking, and each man looked out for himself. With the exception of the survivors who followed orders the crew did not listen to or obey orders.” As a result only fifteen men survived, and twenty three of them drowned as they fled the ship without a life boat. There were no rafts and no armament on the Colabee.

Water Tender B. Gebhard was more graphic in his description. The majority of the men, he said, behaved “like wild animals with fire in the circus, because of lack of firm leadership.” He wryly added that “next time I’m gonna have a gun!” As evidence of the confusion which ensued, the fifteen survivors were rescued by no fewer than three ships and an airplane, so scattered were they. Some landed at Cayo Verde, another remained on the ship, others were brought to Guantanamo and two were taken to Colombia, though the ship was within sight of the Cuban coast at the time.

According to Able Bodied Seamen Alvin L. brown and Theodore Crocker, “some took to boats, some jumped into the sea, some returned to the ship.” According to Water Tender B. Gerhard, two men were crushed while lowering the life boat and five drowned when it failed to lower correctly. He considers that the other 15 fatalities “drowned later.”

The starboard lifeboat – one of only two on board – was demolished by the torpedo explosion. In a panic and without having been ordered to do so, over 20 of the men cut away the port lifeboat and launched it prematurely, while the ship, which had been steaming at 11 knots, still had weigh on her. As a result the boat swamped and many lives were lost – at least seven of their bodies trailing behind the ship. Nine men under survived by righting the capsized port lifeboat. Captain Morgan lost his life, and the ships papers from his briefcase were scattered in the lifeboat, on the chart table and in his cabin, according to Eckman, who remained on board. Several of the papers washed out of the lifeboat and floated on the water, but did not fall into enemy hands.

The submarine surfaced ten minutes after the attack and circled the ship. Bauer and his crew switched on a powerful searchlight and scanned the surface for survivors. One man, Able-Bodied Seaman John Lindsey Cobb, was picked up the submarine and questioned in good English by Bauer and the First Watch Officer (name?). The 1WO “spoke perfect English and stated that he had lived in the states for 10 years.”

Bauer then called over the to the survivors in the boat “we have one of your men”. In an impressive display of maneuverability the submarine came to within 10 feet of the lifeboat and they lowered Cobb into the water so that he could easily swim to the boat. When the submarine approached the lifeboat to put Cobb in it along with nine other men, the First Mate heard the submarine crew using American slang: “Stop her – give her a kick ahead – give her a kick astern.” Captain Bauer was upset to learn from the officers and crew that Colabee was a freighter and not a tanker – he had apparently adjudged her to be the latter.

The First Assistant Engineer, John F. Eckman, remained on board Colabee and at midnight observed a “small fast airplane without lights” flying over the ship at a very low altitude. Two hours later, at 2 am on the 13th of March, another plane, either American or British, flew over with its lights on. Still others were seen in the daytime. After the ship grounded, he tried to put the engines in reverse but was unable to due to both the damage to the engines and the fact that he was alone.  At 2:30 in the afternoon the First Assistant Engineer was taken off the stricken ship by the American tanker Cities Service Kansas which was en route to Matanzas, Cuba.

The ten men in the port lifeboat managed to land at Cayo Verde Lighthouse, Cuba. They were rescued from there by the Cuban steam ship Oriente, which had been en route from Neuvitas to Havana. Oriente deposited the ten survivors back in Nuevitas at 8:00 am on the 15th of March. The ships papers – American and British Confidential codes – were left on board the ship, recovered by the Oriente and Colabee crew, and turned over to the American Consul at Nuevitas. The submarine crew did not board or attempt to board the Colabee.

Ironically the Oriente is the same ship which salvaged the Colabee. In a masterful stroke of seamanship they managed to pull the Colabee off the shore and then anchor her at Confitein Cay. Then she placed several men on the ship and with the assistance of the Cuban Navy began salvaging her. Two other crew members were found by an amphibious naval plane drifting down-current from the site of the attack. They were held afloat by life preservers. They were rescued when the plane landed on the water ten miles from Lobos Lighthouse at 10:00 pm on Friday March 13th, and taken to the Naval Operating Base in Guantanamo Cuba. From there they were reunited with the crew mates in Nuevitas by naval plane. Still two other crew had a more interesting rescue: Able Bodied Seamen Patrick Coleman and Bob Smithers were picked up by a vessel after being discovered drifting on flotsam. They were taken to Cartagena, Colombia by the 28th of March.

Because the law of salvage benefits those who exercise exclusive control over the stricken property, the Cubans politely declined assistance from the owners or crew of the ship as well as the US military. On the 15th of March the First Mate and Engineer returned to the Colabee and noticed that the safety dial on the ship had broken off, but the managed to retrieved the ship’s papers. Salvage was later shared with the American firm Merritt Chapman and Scott as contractors. The ship was ultimately repaired and returned to service in September of the same year, now doubt with some handsome remuneration to the Cuban crew of the Oriente. Ironically, because the ship remained afloat, grounded and was salvaged, had the four officers and eighteen fatalities not panicked but simply remained on board her, they would evidently have survived the ordeal.