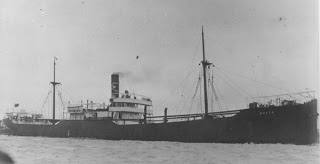 The 3,950-ton Latvian steam ship Everalda was built in 1912 by the William Gray and Company Limited of West Hartlepool, Sunderland, England. Originally she was named Mokta for La Tunisienne Steam Navigation Company Limited (F. C. Strick and Company) of Swansea, UK. In 1932 she was sold to the government of Latvia and renamed Everalda. At the time of her demise she was owned by the Fricis Grauds Shipping Company of Riga, Latvia (MME Zenija Heinrichsons) in the Baltic Sea. When the Russians had taken over the Baltic states the Everalda and one other ship refused to obey the Soviet order to return to port (seven of the eight were attacked and six of them sunk by Axis submarines).
The Everalda’s dimensions were 106.7 meters long by 15.2 meters wide and 8.5 meters deep. Her triple-expansion steam engine generated 312 n.h.p. and propelled the ship at eight knots. On her final voyage she loaded general cargo and left Philadelphia, Pennsylvania bound for Rio de Janeiro Brazil. She had made it to a point northeast of Abaco Bahamas, between Savannah and Bermuda and southeast of Cape Hatteras when U-158 under the determined Erwin Rostin found her. Rostin was not only at the tail end of one of the most successful single patrols of the war, but he had a compelling urge to inform headquarters in Germany about his exploits. This would lead to his – and his crew’s – and the master of the Everalda’s undoing.
The Everalda loaded 4,932 tons of coal in Philadelphia. The ship may have topped up cargo in Norfolk Virginia, because the ship called there on her way to the broad Atlantic. Captain Hartinsons, aged 56, was described as “personally well known to personnel of the Fifth Naval District, as easy-going but considered anti-Nazi and anti-Russian.” He was also described as a “soft, fat man.” His crew totaled 36 men, most of them Latvian, but including members from Finland, Sweden, Norway, Portugal, Estonia, France, the United States, Greece and Spain.
On the 26th of June the Captain attended a convoy conference in Little Creek, Virginia, but because of the Everalda’s low speed he was denied participation in a convoy and routed independently. The Captain had sewed US$2,000.00 in ten, twenty and fifty-dollar denominations in his left rear trousers pocked and in the right rear pocket some British, Argentinian and Brazilian money.

The Everalda cleared Cape Henry, Virginia at 5:00 am local time on the 27th of June. Two days later she had stopped zig-zagging as the Master considered the ship outside of the threat of submarine attack. She was roughly 360 miles southwest of Bermuda and steaming at 7.5 knots in the direction of 140 degrees true, or south-southeast. The weather was settled, with a wind of only about 5-7 knots, a sea of 1-2 feet, and partly cloudy but mostly sunny. There was a seaman on watch on the bridge and Third Mate Olaf Selenius, a Finn, was officer of the watch.

At 11:45 pm when the ship was in position 31.00N and 70.00W a submarine surfaced on the starboard quarter (off the starboard stern), roughly 450 yards away and on a parallel course. The lookouts saw her and the Third Mate immediately blew the whistle three times, which caused the Chief Engineer to stop the engine. Selenius had time to order the ship turned hard to left. Less than a minute later an incendiary shell struck the ship and tracer bullets from machine guns rained down on the deck. These destroyed the aerials, making sending of an SOS or SSS impossible.
There were four men seen manning the large gun forward on the submarine and other men on the conning tower. Machine gun was aimed at the bridge and deck, and the shells were fired at the forward-most cargo hatch (hold number one) as well as the waterline and engine space. Six shells are estimated to have been fired at first at 30-second intervals.

Once it was clear that the merchant men were getting clear of the ship in two lifeboats, Rostin and the men in U-158 stopped firing. They also busied themselves in rescuing a Spanish crewmember, Ordinary Seaman Bernardo Gardama, who had leapt off the Everalda and clung to a piece of wreckage before being spotted and picked up by U-158. About noon, after waiting five to ten minutes, the sub resumed its shelling of the ship, this time sinking nine or more shots into her. This was not necessarily fatal and the ship still floated on an even keel.

U-158 then broke off shelling around 12:10 pm and motored over to the survivors in two boats. They asked the master to identify himself. Captain Hartinsons had been observed to be very nervous since the outset of the attack. He stayed in the saloon, did not exercise his authority over the men, and instead rushed straight for number two boat port side. Such was his hurry that he dropped his brief case with the ship’s papers. Nor did he attempt to throw the confidential routing instructions (British and American) overboard. The Third Mate managed to toss the log book over, but some crew picked up his brief case and put it in the life boat with the captain.

For whatever reason Rostin asked the merchant captain to come over to the submarine, and Hartinsons complied. It was to be a fatal mistake on the part of Rostin, because an American plane which attacked him the following day spoke – and even drew a picture of – an overweight or heavyset man having difficulty getting down the conning tower hatch in time for an emergency dive. Men were reported to have been sunbathing, and if Rostin had allowed his prisoner a breath of fresh air, and it was Hartinsons, jolly and fat, and unable and untrained to get down a hatch quickly, his presence may have contributed to a slower submersion and more time for the plane to attack. In any event a depth charge lodged in the decking and the sub was doomed.

Meanwhile the two lifeboats rowed astern of the Everalda and exchanged men so that there were 17 men in each boat for a total of 34 out of 36, the other two being on the sub. Boat number one, from the starboard side, set off at once, but boat number two lingered for an hour or so. The men noticed an Eagle motif on the conning tower and a six-foot dory stored aft of the tower at the base. The officers and crew in boat number two watched the submarine approach the Everalda on the port side and remain alongside for an hour or more.
The ship was stable and only sank after the sub had left, leading to the conviction amongst the witnesses that the submarine had intentionally only lightly damaged the ship, that they had then sent a party aboard to get the secret codes and that the boarding party had set explosive charges. The last supposition is given credibility by the fact that shortly after the sub left the ship at 1:30 pm, Everalda sank, at around 2 pm, without the submarine having to fire more shots into it. U-158 was seen to head off to the eastwards at roughly twelve knots, on the surface.

During the following week the two life boats sailed northwest towards Cape Hatteras and across the Gulf Stream. The sighted numerous aircraft going north and south but there were at high altitude (perhaps commercial) and did not see the lifeboats. On July 4th 1942 US Coast Guard plane number 183 out of Elizabeth City (New Jersey) Air Station left at 12:50 pm to investigate the report by an Army plane of a lifeboat with survivors in it. At 2:30 pm the plane found the 17 survivors in position 35.28N and 74.53W off Cape Lookout. For the first time from that type of aircraft dropped a “provision bomb” loaded with supplies within a boat length of the life boat.
The USCG plane #183 and a US Navy plane K7 directed two US Coast Guard boats to the scene – these were named FY 20 and CG 400. In whatever order the 17 men were rescued, they were ultimately placed aboard the USS Tourmaline, which brought them into Morehead City, North Carolina on the afternoon of the 4th of July. The other men were spotted 36 miles east – presumably those from boat number two. At 4:30 pm the Coast Guard plane, vectored there by an Army plane, located the second boat 80 degrees true from Cape Hatteras, at 35.31N / 74.40W. Another experimental “provision bomb” was dropped, and the Coast Guard boat, presumably CG 400, took the men to Ocracoke Inlet, North Carolina.