The Abgara was only one of eight free Latvian ships fighting with the allies during World War Two. British-built and owned in Riga, in the Baltic Sea, she was nevertheless controlled from the Latvian embassy in Washington, DC, six of them would be sunk by war’s end – several of them in the greater Bahamas theater, including the Everalda by U-158 northeast of Abaco and the Everleza in the Windward Passage southeast of Inagua. The Abgara’s master was Captain Axel Wilhelm Blome, a Norwegian.

The same fate met the unescorted Abgara, which fell victim to a G7a torpedo from U-108 under Klaus Schultz on the 6th of May, 1942. Her position was only fifteen miles southeast of Great Inagua Island. Within roughly half an hour, and after three torpedoes were fired at the 4,422 ton ship sailing from Jamaica to Montreal Canada with a cargo of sugar, she sank. All 34 of her crew survived the sinking.

After sailing southwest, away from the Bahamas, for 24 hours, the men landed at Playa Blanca (white beach) Cuba near Cape Maysi at 7 pm the following day. At 4:30 pm the following day they were taken in the local schooner Fortuna to the US Naval Operating Base (NOB) at Guantanamo, where they arrived at 1:15 am on the 9th of May. From Cuba they would have been repatriated, probably via air or ship to the US, to sign onto other Allied vessels and continue the war.

Here is an excerpt from the original “Survivor Statements” from the US Navy Office of Naval Intelligence on file at the National Records Administration (NARA) in College Park, Maryland – thanks to Michael J. Constandy of www.westorelandresearch.org: 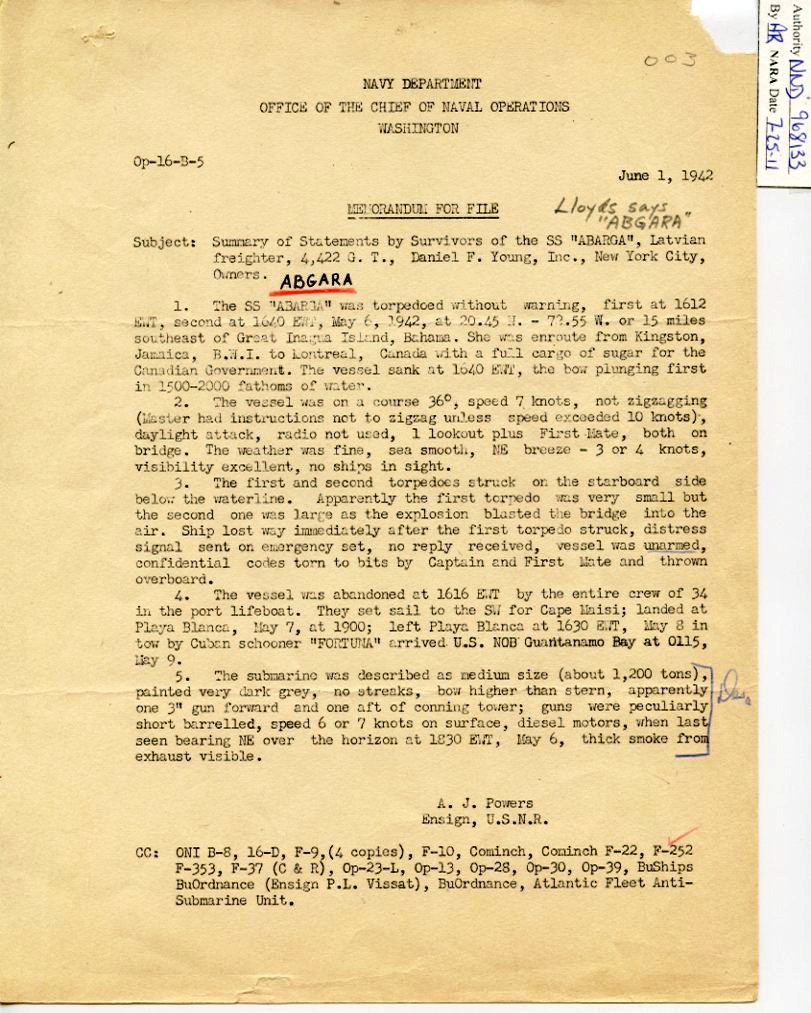